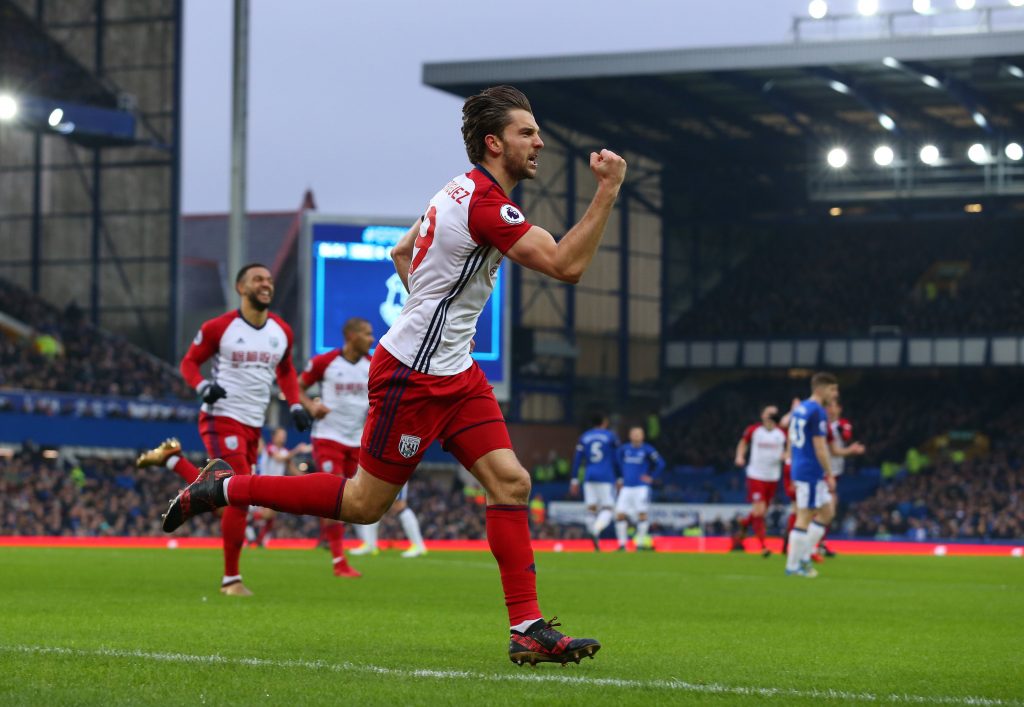 Everton made a strong comeback since Sam Allardyce’s appointment but have lost their rhythm in recent weeks and were under immense pressure ahead of their Goodison Park outing against the 19th placed West Bromwich Albion who have shown some sparks in recent weeks under new boss Alan Pardew.

The Baggies had a dream start when Jay Rodriguez picked up Grzegorz Krychowiak’s long pass from deep and earned the visitors a lead within 10 minutes into the game. The expectations were high on Turkish hitman Cenk Tosun, who mostly disappointed.

The Toffees were jeered by the fans following a dismal first-half but they upgraded the display after the break as they looked more purposeful to stage a comeback. West Brom were defensively resilient but could not clinch a 1-0 win as substitute Oumar Niasse scored with his first touch after coming on for the unimpressive Cenk Tosun.

Debutant Theo Walcott played his part in the Everton goal and could have been their hero with a late winner but his effort, however, was denied by Ben Foster. The cagey contest was marred by the horror injury suffered by James McCarthy, who broke his leg in the process while attempting to block Salomon Rondon’s shot inside the box.

Could not stop Oumar Niasse’s equaliser from close range but did well to deny Theo Walcott’s effor to score a late winner.

Was combative defensively as he pulled off a few blocks, tackles and interceptions, also playing his part in the attack with timely runs and crosses.

The former Manchester United centre-back delivered another solid defensive display but suffered a second-half injury and despite all his efforts, he failed to complete the game and was taken off around the 80th-minute mark to be replaced by Gareth McAuley.

The Egyptian was nervy at times and should have done better to stop the Toffees’ equaliser. Impressed with his passing – particularly long balls, and made some crucial no-nonsense clearances towards the end.

The former Arsenal left-back delivered another consistent display and had an entertaining contest against former teammate Theo Walcott.

Worked hard down the right-hand flank, tested Pickford once with a feeble effort but lost a few duels. His crosses lacked accuracy despite having Rondon inside the box.

The 36-year-old Englishman lacked accuracy while passing but did well in a combative role against his former side and never let Everton gain control of the midfield battle.

The PSG loanee set the ball up perfectly for Jay Rodriguez with a long ball from deep which earned his side an early lead. Worked hard, impressed with his movements and pressed well to force the opponent to make mistakes in the middle of the park.

The veteran midfielder tried to utilise the left flank but could not offer much going forward and was replaced by Jake Livermore.

His only major contribution in the game earned his side a crucial point. He calmly slotted home from Grzegorz Krychowiak’s pass and scored an early opener. Was taken off to be replaced for James McClean late in the game.

Created opportunities, missed sitters and his thunderous long-range strike rattled the crossbar. But the game will remain a nightmare for the Venezuelan as his unintended clash with James McCarthy resulted in a double leg fracture for the Irishman. The incident left Rondon in a flood of tears.

Livermore had a late impact with his physical presence and tackles in midfield.

Didn’t see the ball much but brought in aggression and won tackles for his side to secure a point from the outing.

The 38-year-old veteran made some crucial clearances towards the end.