Now that all English sides involved in the melodrama of the play-offs know which division they’ll be playing in next season, but with still two months before the first fixture of the next Football League season, we can aimlessly speculate about how well those moving up and down the leagues are likely to do next season.

The most interesting set of promoted teams are those coming up to the Championship from League One, a mixture of sides bouncing back from adversity, reasserting themselves after a period in the wilderness and reaching unparalleled new heights. Let’s take a closer look at them.

When a four year stay in the Championship was brought to an end in 2012, thanks in no small part to the Willie McKay travelling mercenaries sideshow, it all looked a bit gloomy for Doncaster. But, even despite losing manager Dean Saunders midway through the season to his ill-fated dalliance with Wolves, they were consistently at the top end of the table and eked through the automatic places in that now famous last day, last minute smash and grab over Brentford.

Despite losing the majority of their squad before the start of last season, Donny recruited well, including striker Billy Paynter from Leeds who managed to grab 15 league goals. The back four was settled and miserly, including Tommy Spurr, who is now attracting interest from other clubs.

But Brian Flynn has now returned to his role behind the scenes, and the club have made the curious decision to appoint Paul Dickov as their new manager. Even allowing for the club’s perilous financial state, his performance in charge of Oldham didn’t really set the pulse racing. Rumoured to also have interviewed the oft-praised Michael Appleton, Dickov must have impressed chairman John Ryan, who will be hoping he can instill some much needed stability at a club who are searching for an identity post Brian O’Driscoll. Dickov has immediately identified speedy player recruitment as a priority, and you can see why with only eight players currently contracted for next season. 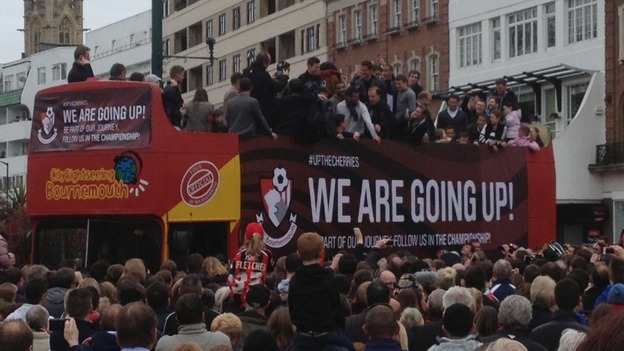 Prying ex-boss Eddie Howe away from Burnley in October was the mark of a club assured of itself and comfortable in its ambition to get back to the second tier for the first time in over twenty years. Despite this, it took an extraordinary run of form in April to guarantee promotion, with the Cherries going unbeaten in nine.

Bournemouth’s strength lies going forward, especially with the recently recaptured Brett Pitman, who fired 20 goals in 29 games. Marc Pugh and Harry Arter are both capable of playing at a higher level, the latter especially liberated after the return of Howe. Their squad is small and settled, and whilst Howe has admitted he will need to strengthen, the foundations are there from which to build on.

Sure to now replace Peterborough as the default dreaded ‘wet Tuesday night in February’ venue for sides like QPR, Yeovil’s ascent to the second flight for the first time in their history marks the culmination of a progressive and sustained period of success which began just over a decade ago when they reached the Football League.

Player of the Year and League One golden boot winner Paddy Madden’s goals were crucial in ensuring Yeovil finished in the play-offs, complimented by the experienced James Hayter. That this was achieved with an average attendance of a little over 4000 and a tiny playing staff is even more remarkable, and although chairman Martyn Starnes is adamant the Glovers won’t simply be making up the numbers next season, it’s difficult to see how the club can expand much further.

But predicting the final outcome of a Championship season is a bit of a mug’s game. QPR should probably be one of the favourites to go up with money seemingly no object, but they contend with their current squad; ageing, fading and bloated. Wigan has a potentially brief but debilitating sojourn into Europe to look forward to, Reading’s pursuit of Royston Drenthe is tantalizingly risky. Watford won’t suffer as a result of closed loan loopholes, as many of last season’s captures will be signed on permanently, but didn’t impress in the play-offs. Nottingham Forest and Leicester will spend, but they’ve done that before and Leeds will be a different proposition under Brian McDermott, but still seem to have no money.

Down at the bottom, there are no clear candidates to be the other side’s six-point certainties. Barnsley will be gearing up for another year of desperately trying to remain clear of the bottom three, and Huddersfield have shown every inclination that they like to join in. Tony Mowbray will be keen to arrest Middlesbrough’s alarming slide in 2013, but with limited resources and a dwindling fan base, they may find themselves in trouble. But equally, all 3 could go up.

Fans of Donny, the Cherries and the Glovers should all take comfort that sides coming up from League One rarely go straight back down. Indeed, Southampton and Norwich went up again straight away. Sides coming up from League One are accustomed to winning consistently and momentum is absolutely key in the Championship. So often a convincing win is followed up by a deflating defeat, such as the tiny margins in a league lacking in quality but brimming with fitness-sapping endeavour. It’s unpredictable, unfathomable and almost impossible to predict.

In short, it’s a lottery. Roll on August.