After two consecutive games in the league, Championship leaders Leeds United would be aiming to get back to winning ways when they face Queens Park Rangers in the FA Cup at Loftus Road this Sunday. Marcelo Bielsa’s men lost to Nottingham Forest but they stay at the summit and remain the favourites to play Premier League football next season.

While the promotion is in everyone’s minds at Elland Road, a good cup run in such a famous competition would be icing on the cake. They are up against a QPR side who haven’t lost a game in five, and are coming into this game with confidence.

Kalvin Phillips is suspended for this game, while Izzy Brown and Stuart Dallas will come back by the end of this month. Liam Cooper and Gaetano Berardi are expected to be back by next month. Patrick Bamford nursed another injury and might not be risked for this game. Tom Pearce is also injured.

Bailey Peacock-Farrell is expected to get a rest and with Jamal Blackman injured and returned to Chelsea, a chance for Will Huffer to impress.

Stuart Dallas is injured and Luke Ayling should get a rest, hence, an opportunity for Shackleton at right-back.

The Peacocks are short on centre-backs and the suspension to Phillips isn’t helping the cause. Thus, Jansson may continue to play games without any rest.

The youngster is expected to get a chance in this game. If he impresses, the manager might have an extra option in this position.

Barry Douglas is expected to be rested for this game, hence, there could be a chance for Davis at left-back.

He has been starting the last few games in this position but with Phillips suspended, expect the Englishman to keep his place.

He hasn’t had many opportunities in the league games to impress the manager. He should get a chance in this game.

Mateusz Klich has played almost every game in the league and deserves a rest. With Hernandez missing a good chunk of games due to injury, expect him to continue playing without a rest.

The youngster should get another crack since he has been doing well and impressing the manager.

With Kemar Roofe is expected to get a rest and Patrick Bamford still out, Roberts may get a chance to shine as a centre-forward.

Read More: Go for it Bielsa – Leeds signing this 28-year-old Premier League star on loan would provide them an upgrade to Klich and Forshaw

He has been a super sub in the last few games for the Peacocks. Expect him to start this match. 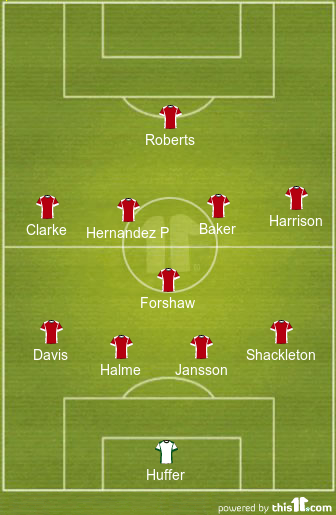