Tottenham needed to win both of their last games to guarantee promotion from the group. But the Bayer Leverkusen draw in Moscow gave them a lifeline.

But in a Champions League campaign full of poor performances, this was perhaps the worst performance of them all, and Tottenham were lucky that Monaco scored only the 2 goals.

Was one of the only Tottenham players to come out of the game, and the short Champions League campaign with any credit. Pulled off one of the greatest saves you will ever see.

Was exposed on the Tottenham right and had little protection, but simply wasn’t good enough. A huge downgrade on Kyle Walker.

Should have been the one to step up and lead the team from the back. But didn’t take any responsibility, and his poor performance was topped off by giving away a penalty.

Lacked any composure or positional awareness. He was all at sea at the heart of the Tottenham back 4.

Didn’t look fit, and presumably, wouldn’t have played if Davies was fit.

In the Premier League, his all-action displays work well. But at this level, his lack of technical ability is brutally exposed. 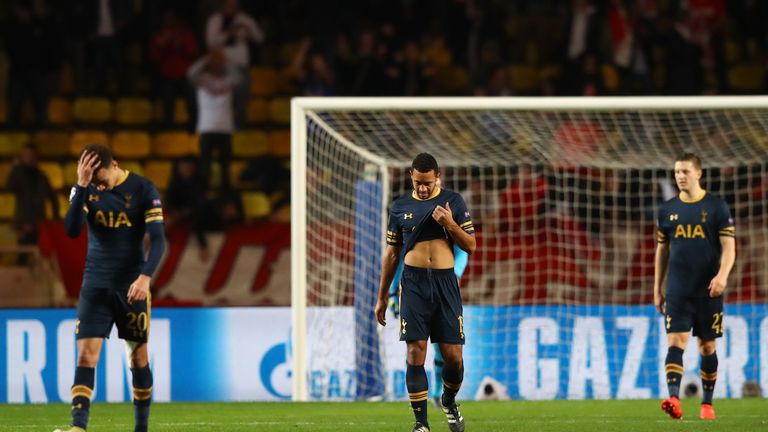 Another that doesn’t look fit and spent too long on the ball. You need to be able to pass the ball in the Champions League and move it quickly. Not his strong point.

Brought back down to earth with a bang after a fantastic week last week. Didn’t do too much wrong, and you have to say the formation definitely didn’t help him.

Won the Tottenham penalty, but looked poor apart from that. Struggled to find space and make anything happen.

One of his worst appearances in a Tottenham shirt. He set the tone for an awful night’s work when he failed to convert a one on one.

Unfortunately for Kane, he was at the mercy of his teammates and was starved of any real service. Scored a penalty.