Chelsea were the favourites to win this game against Huddersfield from the moment the fixture list for the season was announced and as expected, they did look likely to open the scoring.

In the opening minutes, Chelsea were shabby in possession and kept giving the ball away by misplacing simple passes in the opposition half. This allowed Huddersfield the odd break down the left-side where Diakhaby was growing as a threat.

But just about 10 minutes into the game, Chelsea gradually began to take control of the ball. With some good movement and passing, they were looking quite dangerous and the opening goal was just a matter of time. 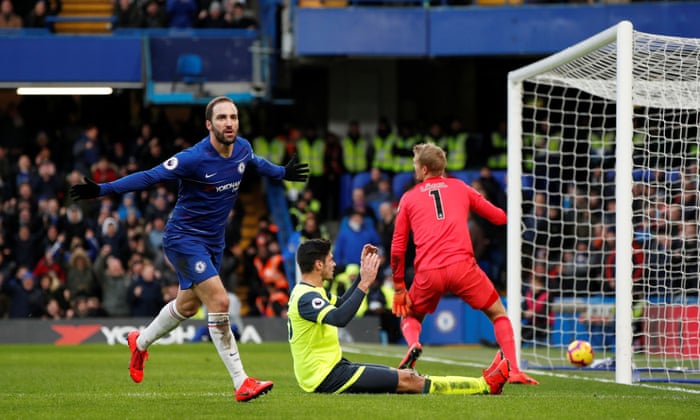 It was in the 15th minute that Chelsea opened the scoring with a goal that would’ve made under-fire manager Maurizio Sarri very happy. Chelsea kept the ball with patient passing and build-up play.

They kept moving it from side to side until it reached Kante, who saw a darting run from new signing Gonzalo Higuain. He played a pin-point pass to the Argentine, who blasted the ball into the roof of the net from a pretty acute angle to make it 1-0 to the home side.

After the goal, Chelsea began to gain confidence and moved the ball well throughout the half. Despite Huddersfield’s best attempts to get forward and get back into this game, David Luiz and Andreas Christensen stood firm.

On the verge of half-time, an adventurous forward run from right-back Azpilicueta took him all the way into the box. He was tackled from behind by a panicking Kachunga and the referee pointed straight to the spot. 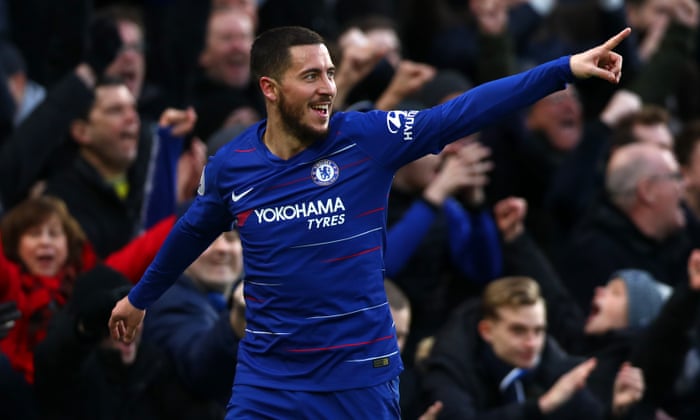 On further inspection by the replays, it was seen that the contact was actually outside the box. But nonetheless, Eden Hazard stepped up to take the spot-kick and in his usual fashion, sent the keeper the wrong way to make it 2-0 to the Blues at half-time.

When the second half kicked off, it was obvious that Chelsea would continue to hold the ascendancy and after what probably felt like an eternity to the Terriers’ fans, it was in the 66th minute that Chelsea broke through again.

A sharp counter erupted from the back and the ball ended up with Barkley in the opposition half. He picked out a peach of a pass to Hazard on the left flank. The Belgian was composed enough to round the goalkeeper and then had the presence of mind to lift the ball over the sliding defender to make it 3-0.

As it looked like Higuain was slowly tiring out, Chelsea got their fourth when a good move on the left side saw Hazard play Kante in the middle. He flicked the ball outside the box to Higuain, whose wicked shot took a slight deflection off Kongolo before nestling the top corner of the Terriers’ net.

Read More: Chelsea have missed a golden chance to sign PL star and fill the void left by Fabregas’ departure

To finish it all off, a Chelsea corner in the in the 86th minute was fed to David Luiz whose powerful header was too strong. It took a deflection and ended up in the back of the net as the Blues produced the perfect response to the embarrassing defeat in midweek.

Here’s how some satisfied Chelsea fans reacted to this emphatic win:

Kante, Kante, Kante… i think he should get more credits… his runs, passes, defending… absolutely our heart

Happy are Chelsea fans!
Thank you all.
Congratulations Sarri

What a response!!! Hazard and El Pipita that second goal

Good win. Brace from Hazard and Higuain. This could be the beginning of a beautiful relationship between two

What a fantastic performance against a team who were perhaps not at their best, but at the same time looking to get something out of the game. Yet they had no answer to the birth of an exciting new strike partnership, who promise so many good and great things for the future.

Tonight’s award should be a “Men of the match” award for Kante, Hazard and Higuain.
Kante proving he’s more than just a “defensive” midfielder

Fantastic response. This is Sarriball.
Quick passing and being direct as well.
No constant back passes.
You know you got a quality striker just by looking at that 2nd Goal. Really great.