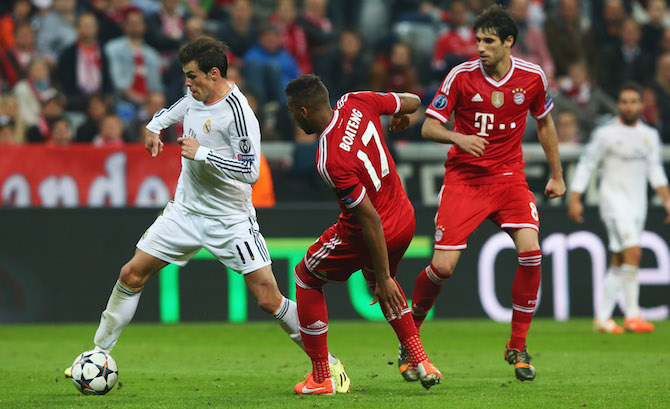 In what is expected to be a mouthwatering semi-final clash of this season’s Champions League, Bayern Munich cross swords with Real Madrid, with the German giants first welcoming the European champions to the Allianz Arena on Wednesday.

Under the tutelage of Jupp Heynckes, Bayern have managed to wrap up the league title for a 6th consecutive time and have now set their eyes on completing the first treble since 2013.

Real Madrid, on the other hand, have endured an underwhelming season in the La Liga whereas they have looked a different beast in the European competition. After falling way beyond table-toppers and arch-rivals Barcelona, Champions League remains the only chance for Zinedine Zidane to salvage Real’s season.

Ahead of the riveting battle between two European juggernauts on Wednesday, here we pick a combined line-up featuring top players from both Real and Bayern.

Keylor Navas has been a permanent fixture for Real since joining from Levante in 2014. Although he was dismal against Juventus in the second-leg, there is no doubting his shot-stopping abilities and the Costa Rican makes the cut ahead of Sven Ulreich.

Kimmich has been excellent for Bayern, effectively filling the void left by legend Philipp Lahm. The German has established himself as a regular starter and makes it to the team ahead of one of the world’s best right-backs, Dani Carvajal, who misses out due to inconsistent form this season.

One of the world’s best defenders, Ramos is an easy pick. However, he needs to iron out the reckless nature of his game against the lethal Robert Lewandowski.

Partnering Ramos at the heart of the defence is Hummels, who has enjoyed yet another strong season with the Bavarians. He is dominant in the air and is a very good passer of the ball. However, he will have a task cut out against the red-hot Ronaldo.

It was a really tough decision between Marcelo and David Alaba but I choose to go with the former. While Alaba has been excellent for Bayern, Marcelo has dished out consistent displays in the Champions League. The Brazilian’s marauding runs from left-back have always been a major attacking outlet for Real.

Casemiro’s defensive duties are top notch as he sits deep and shields the defence, which allows the Real attackers to flourish. He is a strong tackler of the ball and helps his side by doing all the dirty work in the midfield.

A fantastic passer of the ball, Kroos has enjoyed a strong season at Real. He adds a calming influence to the Real side, which makes them tick. Against his former club, Kroos will be raring to go.

It was very difficult to leave Luka Modric out of this team but such has been the Croatian’s inconsistent form this season. In place of Modric, James Rodriguez comes in, as the Colombian has finally found the rhythm and confidence at Bayern, which he had lost at Real.

No prizes for guessing! Cristiano Ronaldo is an obvious pick as one doesn’t need to explain or justify his selection. The man from Portugal is in blistering form of late; with 15 goals in 10 Champions League games this season, Ronaldo is Real’s biggest asset and will want to continue his form against Bayern.

Müller endured a tough start to the campaign when Carlo Ancelotti was in charge of Bayern. However, after Heynckes’ appointment, the German sprung to life and has not looked back.

Müller has rediscovered his mojo and is firing all cylinders currently at Allianz Arena.

Robert Lewandowski completes our combined line-up, taking his usual centre-forward role. The Pole is a deadly striker and keeps the ability to score goals out of nowhere. With 38 goals in 42 games this season, he is an easy pick.