A quarter of the way into a pulsating Premier League, we take a look at a few players who have proven to be value for money. 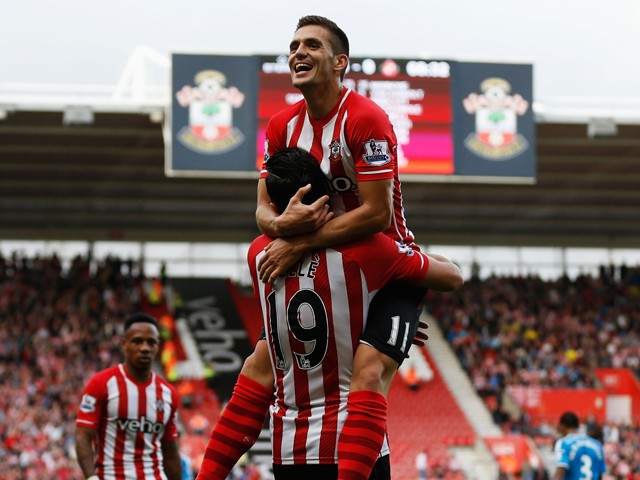 Following key departures at the club, Southampton have perhaps been the surprise package in this early stage of the season, as their astute signings and rebuilding progress has carried them into the Champions League places and second in the table.

Following a mini-exodus at St Mary’s which saw Adam Lallana, Dejan Lovren, Rickie Lambert, Calum Chambers and Luke Shaw all leave the club, pundits and Southampton fans were fearing the worse over the summer, but the money recouped from sales was spent wisely by new boss Ronald Koeman, who has managed to bring players that have quickly adapted to the league, gelled together and formed a potent team. So many stars left the club in the summer that Southampton accumulated more money in selling players than any other team in Europe.

As well as the money spent from the sale of players, defensive players Ryan Bertrand and Toby Alderweireld were brought in on a season-long loans, adding stability at the back in the Premier League’s meanest defence along with Fraser Forster, who was signed from Celtic and continues to emerge as a top draw goalkeeper.  Shane Long and Sadio Mane came in as the most expensive signings at £12m and £11.8m, but both are real threats in attack and will continue to score goals for the club. Out of all the players recruited in the summer, two players have really shone since arriving – Graziano Pelle and Dusan Tadic.

Italian striker Graziano Pelle has adapted to the English game very quickly and can’t stop scoring at the moment. The striker was reunited with former Feyenoord coach Ronald Koeman, where he spent two seasons, scoring a remarkable 50 goals in 57 appearances for the Dutch club.

The 29-year-old scored twice to help send Southampton into the quarter finals of the league cup with as stunning strike from outside the box and a poachers finish to take his tally up to nine in 12 appearances in all competitions.  The striker has shown his instinctive qualities inside the box, but he has also proved he is capable of producing a moment of magic, no more so than his world-class overhead kick against QPR, which is definitely an early contender for goal of the season.

At just £8m for a striker with his goal scoring exploits before joining the club and his current goal tally, Pelle has got to be the bargain of the season so far. He is now the third highest scorer in the league with six this season, only behind Berahino on seven and Costa and Aguero both on nine.

Since October 2012, Pelle has an incredible return in front of goal, scoring 64 times in 77 games.

Ronald Koeman’s first signing at Southampton was the third expensive player to sign for the club, but has made a huge impact since swapping Eredivisie for the Premier League. Predominantly left footed, one of Serbia’s most exciting talents operates on the left, but can also play on the other flank and behind the striker. His link up play with Pelle and the ease in which he has settled in at the club has been hugely impressive. Although he has only found the net once in the league so far, the playmaker has already got seven assists in the league, including four in the 8-0 rout at home to Sunderland.

Credit has to be given to Koeman again, after his knowledge during his time in the Dutch league has paid off and he has brought in two exceptional players.

In a deal believed to be around £8m, the Icelandic playmaker has made an impressive start and been one of the key attacking players in a buoyant start to this campaign for Swansea. Sigurdsson made an impact immediately, setting up the opener and scoring the winning goal in the opening league match to hand the Swans a famous 2-1 win at Old Trafford.

Swansea manager Gary Monk immediately recognised Sigurdsson is best suited when operating in the hole behind the striker rather than out wide, which was a regular occurrence during his time at Spurs. He has certainly excelled since in his second stint at the club, linking up well with the clubs top scorer Bony, scoring once and level with Tadic on seven assists, just two behind Fabregas.

The Senegalese striker arrived at Upton Park with high hopes after finding the net 44 times in 114 appearances for previous club Metz. Sakho started attracting attention last campaign where he netted 20 times in 36 appearances for the French side as he helped them win the Ligue 2 title and was voted Ligue 2 player of the year. Now with the Hammers, Sahko has already scored five goals in six starts for the club and hasn’t failed to find the back of the net since September 20 after a 3-1 win over Liverpool.  At just £3.5m, Sakho has to be the best value for money  signing of the season so far, especially after scoring goals against the likes of Manchester United, Man City and Liverpool.

Leicester’s club record signing was on fire for the first five games of the season since his £8m move from Brighton to the Foxes, but after the Argentine’s explosive start, Ulloa is now experiencing a mini goal drought after failing to score in four appearances since putting two past Manchester United in a 5-3 win. The strikers form has coincided with poor team performances, but he will hope his teammates can create the chances he needs to feed off and rekindle his goalscoring touch.

Mohamed Diame was one of many new faces to arrive on Humberside and targeted as a player to add more ‘steel’ to Hull’s midfield. The big midfielder  is renowned for his power, tackling, defensive contribution and driving runs, but Diame has also added goals to his game, scoring four times in 9 leagues matches, three goals away from matching his tally of seven  goals in 66 appearances for the Hammers. Diame’s abundance of strength and pace have drawn comparisons to Yaya Toure, but he has perhaps never received the full recognition he deserves as he has never played for a big club. At just £3.5m, Diame has been a bargain deadline day signing for the Tigers.

Player values are taken from transfermarkt.com