Celtic 5-1 Kilmarnock: The Hoops storm back to the top

Celtic leapfrogged Kilmarnock to the top of the Scottish Premiership with a thumping 5-1 victory in their clash at the Parkhead on Saturday.

Steve Clarke’s Kilmarnock travelled to Glasgow with a one-point lead over both Rangers and their Old Firm rivals but they went behind inside five minutes when James Forrest swept Celtic into the lead with a well-taken drive.

Tom Rogic had two decent chances to double the lead in the next ten minutes but he was denied by Daniel Bachmann in goal. Odsonne Edouard had a good chance to double Celtic’s money but after an excellent interchange with Scott Sinclair, he dragged his effort wide.

But the constant pressure exerted by Celtic finally paid off as Edouard netted in the 24th minute to make it 2-0 for the home side. An incisive Celtic attack through the middle saw Rogic play in Edouard, who confidently blasted the ball from 14 yards out past Bachmann into the roof of the net. 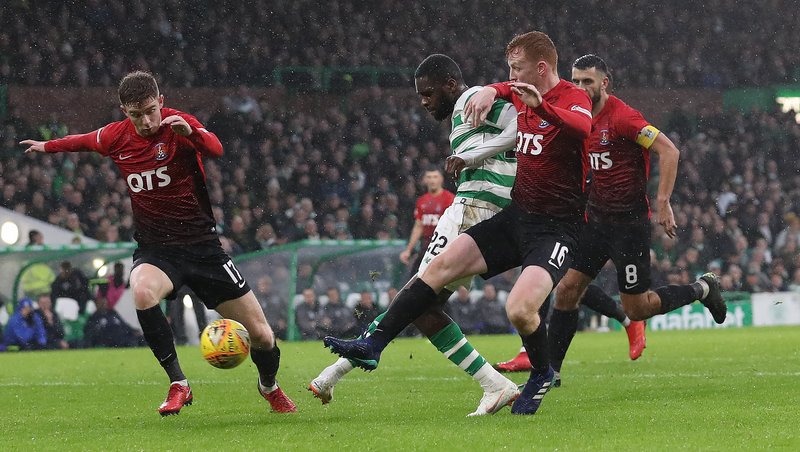 And it got only better for the Hoops ten minutes later when Callum McGregor floated a free-kick into the box and Mikael Lustig poked the ball into the net.

Ryan Christie piled more misery on Kilmarnock by curling in the fourth with a 25-yard free-kick moments before the half-time break and the home side were given a deserved standing ovation going into the tunnel.

Seven minutes after the break, Kilmarnock pulled one back through substitute Eamonn Brophy. Celtic defender Filip Benkovic was adjudged by the referee to have fouled McKenzie inside the box. Brophy, on for Aaron Tshibola in the second half, reduced the deficit by slamming home the resultant penalty in the 52nd minute.

Brendan Rodgers’ Celtic responded with Forrest hitting the post before Scott Sinclair smashed one onto the bar. But Forrest made his mark once again in the 67th minute, slamming home his second of the evening from an angle when the ball broke loose after Bachmann had saved Christie’s effort.

Ecstatic with the big win over Kilmarnock, here’s how Celtic fans reacted on Twitter.

Back where we belong

Top of the table where we belong 🍀💪🏻

Bk to normal just win every game now till end of the season.

Brilliant ! Enjoyed every minute. Thanks Bhoys and @CelticTV Tom ya legendary *skelper ye

Class Performance…..can’t believe they got a pen though, was never in the box!

Absolutely fantastic performance!! However congratulations to @KilmarnockFC for drawing the second half, if they can keep that up for a full game they’d be level on points for the match.