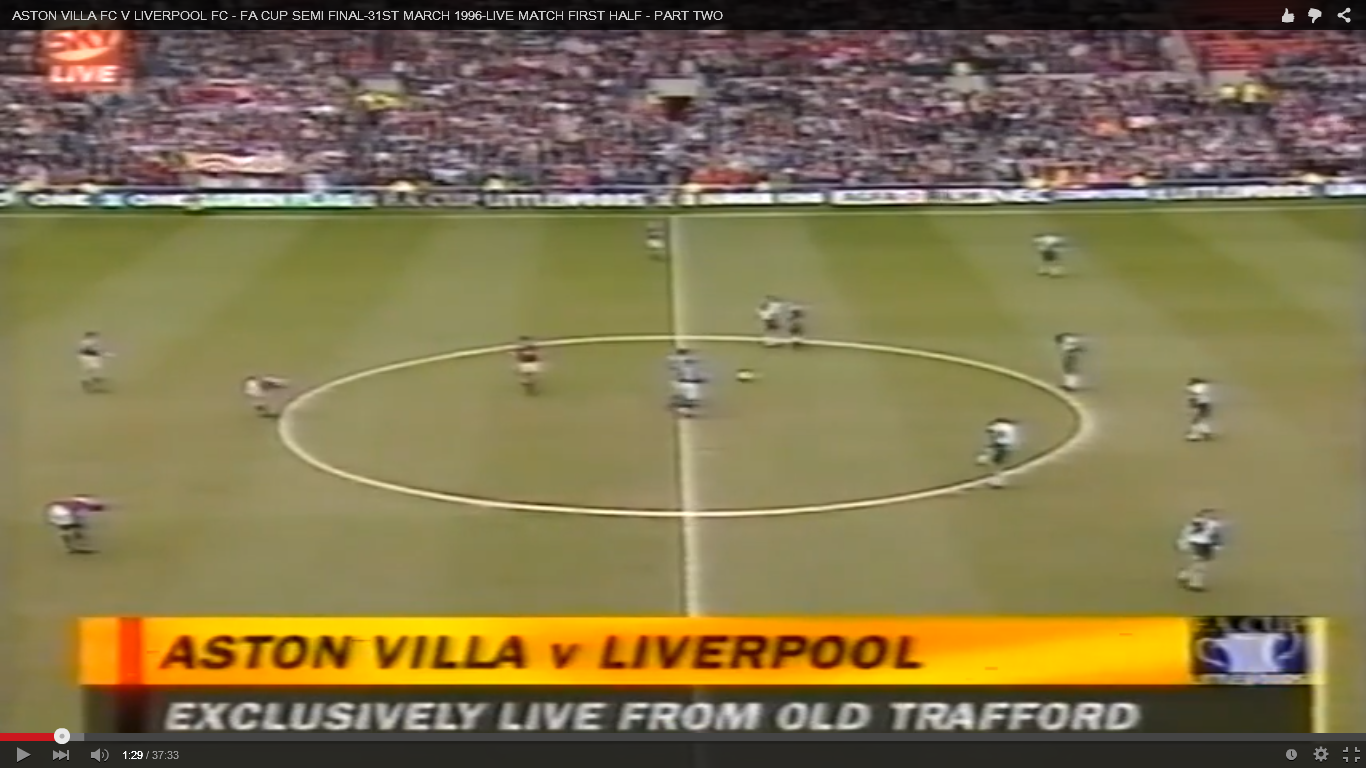 Now Liverpool has beaten Blackburn Rovers in their FA Cup Sixth Round replay, they face the prospect of a Semi-Final clash with Aston Villa.  For me, this brings back memories of our last meeting in the competition in 1996.

In a rather convenient twist of coincidence, today happens to be Robbie Fowler’s birthday, so it’s fitting he is remembered here.

The two were in the top four in the League, Villa had just won the League Cup (sponsored by Coca Cola) beating Leeds United at Wembley, replacing Liverpool as holders of the trophy.  They were two of the top sides in the country at the time.

The other Semi-Final kicked off earlier in the day at Villa Park where league leaders, Manchester United beat Chelsea, 2-1 with goals from Andy Cole and David Beckham. Attention now turned to Old Trafford for the second Semi-Final.

Liverpool and Aston Villa were meeting for the third time in the three months.  At the end of January goals from Stan Collymore and Robbie Fowler gave Liverpool a 2-0 win at Villa Park.  Five weeks later, in one of the most pulsating starts to a Premier League match ever seen, Robbie Fowler was again on target, twice, as he and Steve McManaman destroyed Villa within eight minutes of the kick-off.  At that stage Villa had only been beaten twice since just before Christmas and Liverpool had been their avengers on both occasions.

This Semi-Final was Villa’s first since 1967, but Liverpool were at this stage for the second time in five years and their fourth in the previous ten. 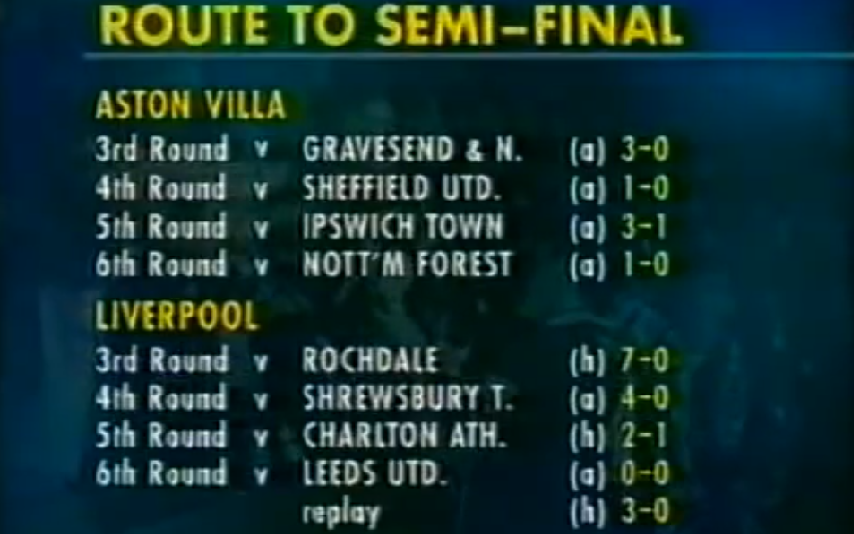 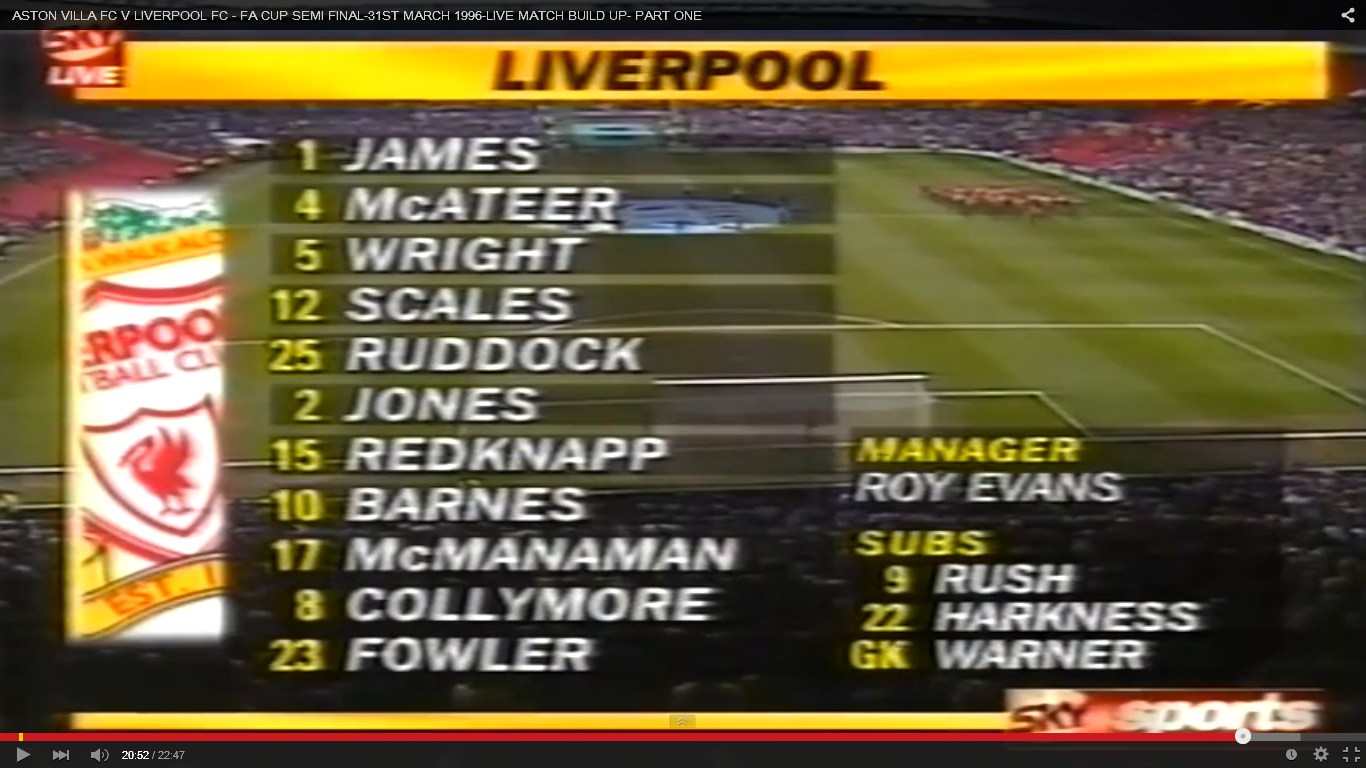 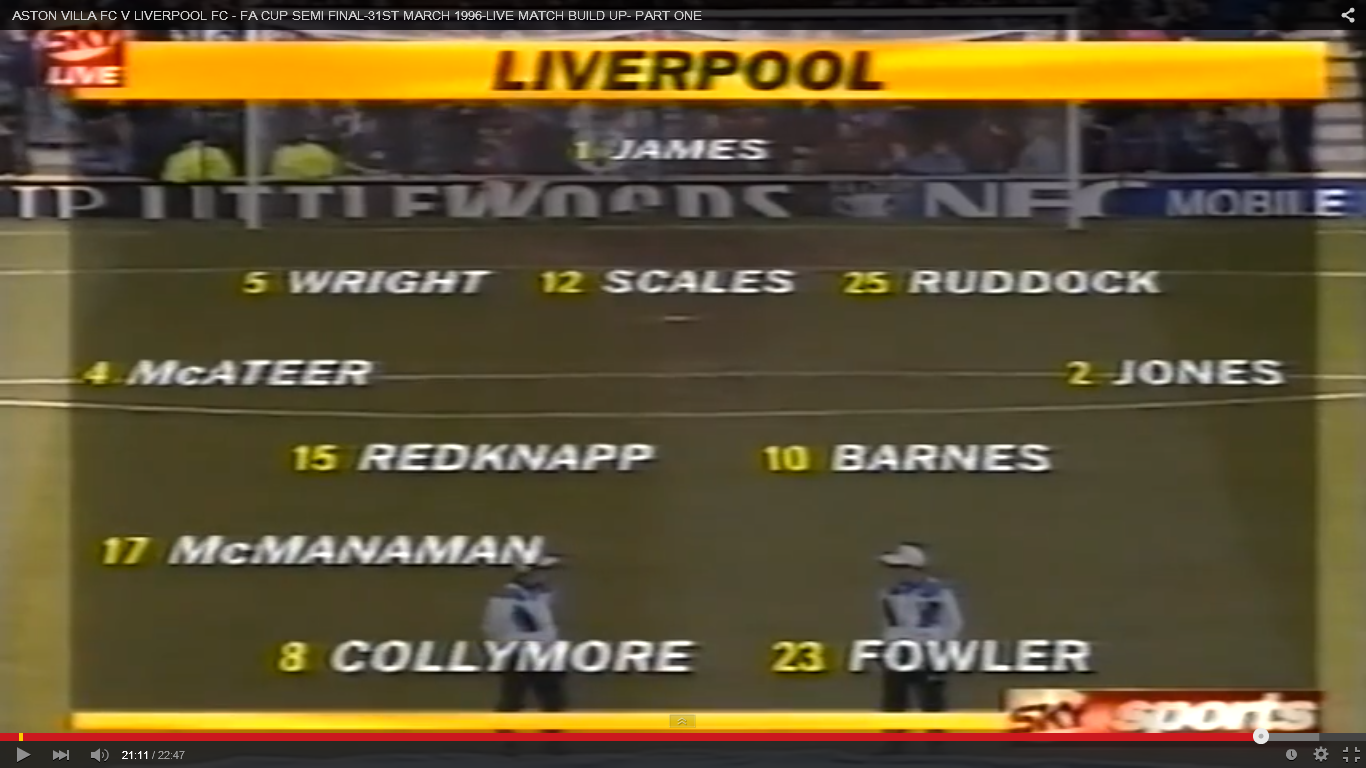 Villa, managed by former striker Brian Little, suffered a blow in the first half when Gareth Southgate injured a knee in a challenge with Mark Wright.  He hobbled off, but responded to treatment and was able to come back on a few minutes later.  His first duty was to defend a free-kick and that’s when Liverpool took the lead.  Jamie Redknapp, playing his first match for four months, floated the ball into the area and that man Fowler got on the end of it, as his diving header went under Mark Bosnich.  Fowler was being marked by Southgate but got to the ball first and scored his seventh goal in just six games against Villa in his short career and got Liverpool off to a great start.

Southgate eventually succumbed to his injury and was replaced by former Liverpool defender, Steve Staunton.  Staunton, who won an FA Cup winners medal with Liverpool in 1989, had, had a torrid time against Fowler in their recent meetings, but he needed to try and shore things up at the back.

The goal seemed to galvanise Villa and they had a shout for a penalty just three minutes after going behind.  Dwight Yorke headed the ball on for Ian Taylor to burst in between McManaman and John Scales but as McManaman got his foot to the bouncing ball, Scales’ challenge from the other side appeared to impede Taylor.  Referee Paul Durkin adjudged the ball the chance to have gone before Scales challenge came in and he waved away the protests.

David James saved bravely from close range to deny Yorke from a corner as Villa were getting the better of the chances.  Liverpool still lead at the break and Collymore might have put the game beyond Villa’s reach just after the re-start if Fowler’s pass had found him.  The second half was real end-to-end stuff.  On the hour Villa had another great chance when Milosevic headed down a cross and Ugo Ehiogu tried to turn the ball in from three yards out but again James got down to smother the ball.

As the game moved into the final quarter of an hour, Paul McGrath’s tentative backpass almost allowed Fowler in but Bosnich managed to tackle him inside the area and the chance had gone.  Minutes later Collymore was sent through but this time McGrath timed his tackled perfectly to deny the Liverpool striker.  Milosevic was lucky to get away with a Beckham-style kick at Jones before Ehiogu was again denied by a crucial block from Scales just six yards out.

As Villa struggled to keep Liverpool out John Barnes, in a central position 25 yards from goal, bent a shot which crashed against the upright with Bosnich beaten.  There was a scramble in the Liverpool area when James decided to come for a corner but found the ball curling away from him and by the time he got a hand to it he was almost out of the area. Needless to say he dropped the ball and after a frantic moment, Liverpool cleared.  In a rather surreal passage of play, at one end there was James trying to get to a corner regardless of where the ball was going to land in the area, then when it was cleared downfield and out of play, the opposite keeper, Bosnich, took the resultant throw-in for Villa.  Strange breed these goalkeepers.

With four minutes to go Liverpool then sent on the competitions record goalscorer, Ian Rush and his first action came when Liverpool were awarded a free-kick wide on the left about 15 yards from the bye-line.  Redknapp took it right footed and Staunton headed it away from his six yard line and probably thought he’d cleared the danger, but Fowler, as if he’d almost read an advance copy of the script, was waiting there to chest the ball down and volley it left-footed in off the post.

It was his 33rd goal of the season and his fifth against Villa this season.  As Villa then pressed forward, McManaman broke away and squared for McAteer to roll the ball into the net to complete the scoring.  Liverpool won 3-0 and earned their eleventh FA Cup Final appearance.  Fowler had scored twice at Old Trafford back in October when Cantona returned after his ban, and he was here again against a side who must’ve been sick of the sight of him.

Liverpool had prevailed in the Semi-Final against Aston Villa playing three at the back, Wright, Scales and Ruddock, with two wing-backs, McAteer and Jones.  Wonder if they’ll play the same formation in a few weeks’ time and get the same result?