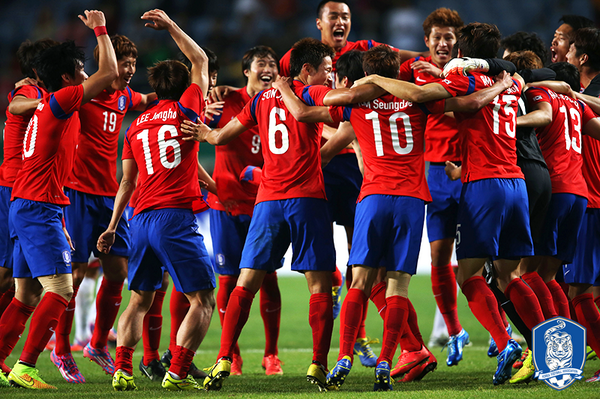 No, not that kind of history; we all know the troublesome history between these two nations whom remain technically still at war, but rather let’s review the footballing history between South and North Korea.

The first meeting between the two opposing ideological nations occurred in another Asian Games final in 1978 in Bangkok. The game was a stalemate much like the Korean War ended up, after extra time and to everyone’s pleasing the two Koreas shared the gold medal.

The football history between the two Koreas has been full of feisty encounters with multiple hullabaloos. None more so than a 2010 World Cup qualifier in Seoul, where the South won 1-0, but were accused of a “deliberate act perpetrated by adulterated foodstuff as they [the players] could not get up all of a sudden just before the match.”

In the most recent of meetings at youth level North Korea overcame the South in the U-16 Asian Football Championship (AFC) final. The southern neighbours entered the final as favourites after having Barcelona wonderkid, Lee Seung-woo, light up the tournament with some spectacular displays. However, it would be hardworking North that would capitalise on two defensive errors to triumph 2-1.

Beyond youth level North Korea victories are rare, in fact the North’s only victory came in an international friendly in 1990. The DPK won the only game to ever have been played in their capital Pyongyang, winning by two goals to one. Other attempts to play games on home soil have been thwarted by politics and their refusal to play a national anthem or display a flag of a country it doesn’t even recognise as existing.

In a tournament lacking much star quality the Olympic under-23 format 2014 Incheon Asian Games brought us a final pairing that appeals to our intrigue. But, one that seems rather downplayed in the Korea that gives us excellent washing machines, TVs and mobile phones. Where we in the West see this as a battle of communist versus democracy, dictatorship versus freedom. The media and people in South Korea see it more simply as a game to win another gold medal.

The interesting paradox that exists for both the North and South Korean players is the potential awards of winning the gold medal. The North’s athletes are sometimes rewarded with cars and apartments; in a nation where only 2.83% of the roads are paved that may be more trouble than it’s worth.

South Korea’s reward for winning the gold medal is that the players are exempted from completing the two-year military service required by every Korean male, which if the worst-case scenario of another Korean war were to occur then it would be against the nation their finale opponents represent.

Both teams arrived to the final in a not too dissimilar fashion to the recent AFC U-16 tournament. Home nation South Korea were yet to concede a goal prior to the final and arrived at a canter to the final in Incheon comfortably beating Thailand 2-0 in the Semi-final. North Korea started the tournament with an impressive 3-0 victory over China, but in the quarter and semi finals could only manage a scrappy pair of one nil wins, the semi-final being settled in extra time.

Perhaps the bigger worry for the North had been the dismissal of their leading goalscorer in the tournament, and match winner in both quarter and semi finals, Jong Il-gwan whom has been linked with a move to Newcastle United in the past.

Their coach Yun Jong-Su, in a Jose Mourinho-esque style, produced some pre-final mind games with an attack on the refereeing standards of the tournament, and warned that the final versus their neighbours must be “refereed fairly.”

The South has previously been deemed to benefit from home soil coaching decisions the infamous cases of Roy Jones Jr. and of course the Italian, Portuguese and Spanish exits at the 2002 World Cup.

So the main focus of the build up to the final was on the hope for a fair result rather than tactics or the grand occasion.

The occasion itself in much homage to the entire tournament the game was a scrappy and sometimes tepid affair. The opening 20 minutes, and it must be said most of the match, amounted to a few rough tackles from the North, a bit of riving around on the ground by the South Koreans (sometimes in simulation) and a number of bouts of pushing and shoving between the players.

The first real chance fell to North Korea in the 22nd minute when So Kyong-jin wastefully shot over after a deflection had fallen kindly into his path inside the area.

South Korea were dominating possession and producing some flashy flicks, although other than the usual amount of high-volume, but mostly far from pinpoint crossing, the North’s robust no-thrills direct style was providing more of a threat on goal.

Five minutes before half time saw the first test for the North Korean shot-stopper Ri Myong-guk. The diving head of the lively Lee Jong-hoo met a corner delivered to the near post, but the header found only the knees of Ri and bounced to safety.

In the second half the home team really upped the tempo and pressured the North Koreans on the ball. However, their high-tempo pressing was badly let down on numerous occasions by some woeful attempts at goal and also wave after wave of desperate North Korean defensive blocks.

A match littered with a lot of miss-control of the football and a lack of clear-cut goal scoring opportunities it was made up for by its feistiness. The clear difference in physical stature between the nations was not preventing the North Korean national team from enforcing their physicality on the game.

As the clock ticked on it was clear that a single goal would decide this battle of the Koreas. That moment almost arrived on a rare furore forward by the North, as striker Rim Kwang-hyok’s deflected effort breezed past the woodwork, which was duly rattled by strike partner Pak Kwang-ryong’s bullet header from the resulting corner.

But eventually as the game entered extra time South Korea’s superior possession and dangerous set-pieces would deliver the game’s elusive goal. Their 11th corner the game was misjudged by the North Korean goalkeeper and the ball found the thigh of South Korea’s Lee Yong-Jae. This touch may have been enough to have seen the ball already cross the line even after an attempted Luis Suarez-esque handball, but as the refereed placed the whistle in his mouth to blow for a 120th minute penalty kick, Rim Chang-woo blasted in from six yards to save him the bother.

It was a quite extraordinary goalmouth scramble of a goal. It involved a badly misjudged flight of the ball by the goalkeeper; the left thigh of Lee; a clear handball; a possible off the line clearance and finally a desperate snapshot to end the game’s deadlock. Rim Chang-woo was the man to end a 28-year wait for an Asian Games footballing gold medal. He plays in the second-tier of the K-League for Daejeon Citizens and has the honour of being the right back that both opened and closed the scoring for the South Korean Asian Games national team. Ensuring him and all his teammates the joy of a gold medal and freedom from military service.

The North Korean footballers will be heartbroken by their last-minute defeat to their bitterest rivals, but the gold medal success of their FIFA ranked top-10 women’s team and a continued strong showing at youth level means the country some refer to as the ‘hermit kingdom’ has cause to be optimistic about their footballing exploits over recent years.