Sokratis Papastathopoulos vs Jan Vertonghen: Who is the better defender?

Arsenal entered the Unai Emery era in an underwhelming manner as they lost to Manchester City at home for their season opener. To be fair, the pressure on the new boss is immense and the fans must be patient before things start working out.

Arsenal had a successful summer as players like Bernd Leno, Sokratis Papastathopoulos, Stephen Lichtsteiner, Matteo Guendouzi and Lucas Torreira joined Emery’s forces. After Arsene Wenger left the club, it was important for the Gunners to address the defence and Emery did exactly what was the need of the hour.

Skipper Laurent Koscielny’s long-term injury, coupled with Per Mertesacker’s retirement, meant the club needed a reliable centre-back to start for the season. With Shkodran Mustafi the only senior central defender in the squad, the Gunners acted swiftly and signed Sokratis Papastathopoulos from Borussia Dortmund.

Sokratis, who has signed a three-year deal at Emirates Stadium, is excellent at winning challenges both on the ground and in the air. He is typically an aggressive defender who relishes facing physically imposing players and is always determined to play on the front foot.

With the new Premier League season up and running, let us have a statistical comparison between Sokratis and one of the top-tier’s best central defenders, Jan Vertonghen.

Both Sokratis and Vertonghen are aggressive centre-backs who never tend to hold back. They are typical physically dominant defenders and are capable of making life terrible for opponent strikers. 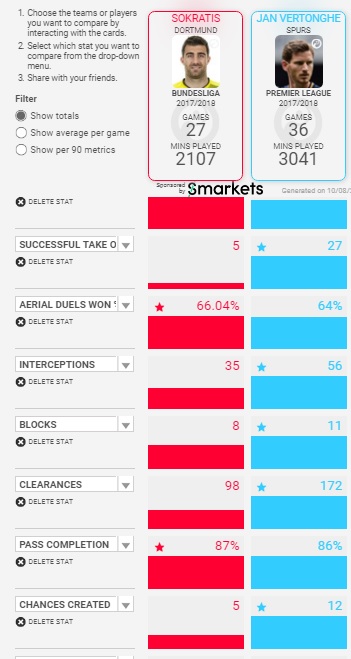 These stats prove as to why Vertonghen is one of the top defenders in the Premier League. But it is wrong to judge Sokratis so early in the season. After all, he is a leader and Arsenal were in dire need of someone like him.

When he plays well, Sokratis can be a fantastic defender. However, he will need a calm head alongside him. In that case, pairing Mustafi could be dangerous as both of them are inclined towards playing on the front foot.

At 30, Sokratis is an experienced defender who is expected to considerably strengthen the Arsenal back line. He has certain weaknesses in his game but if he quickly adapts to the Premier League, the Greek could be a boon for Arsenal.