Logically Villas Boas would have looked at Paul Lambert’s Aston Villa setup from the opening day of the season, where Fabian Delph and Ashley Westwood were phenomenal in shutting down Arsenal’s midfield. Hence, setting up with Paulinho and Moussa Dembele in midfield to press heavily, as well as playing a high line to squeeze Arsenal’s midfield further, were correct calls. 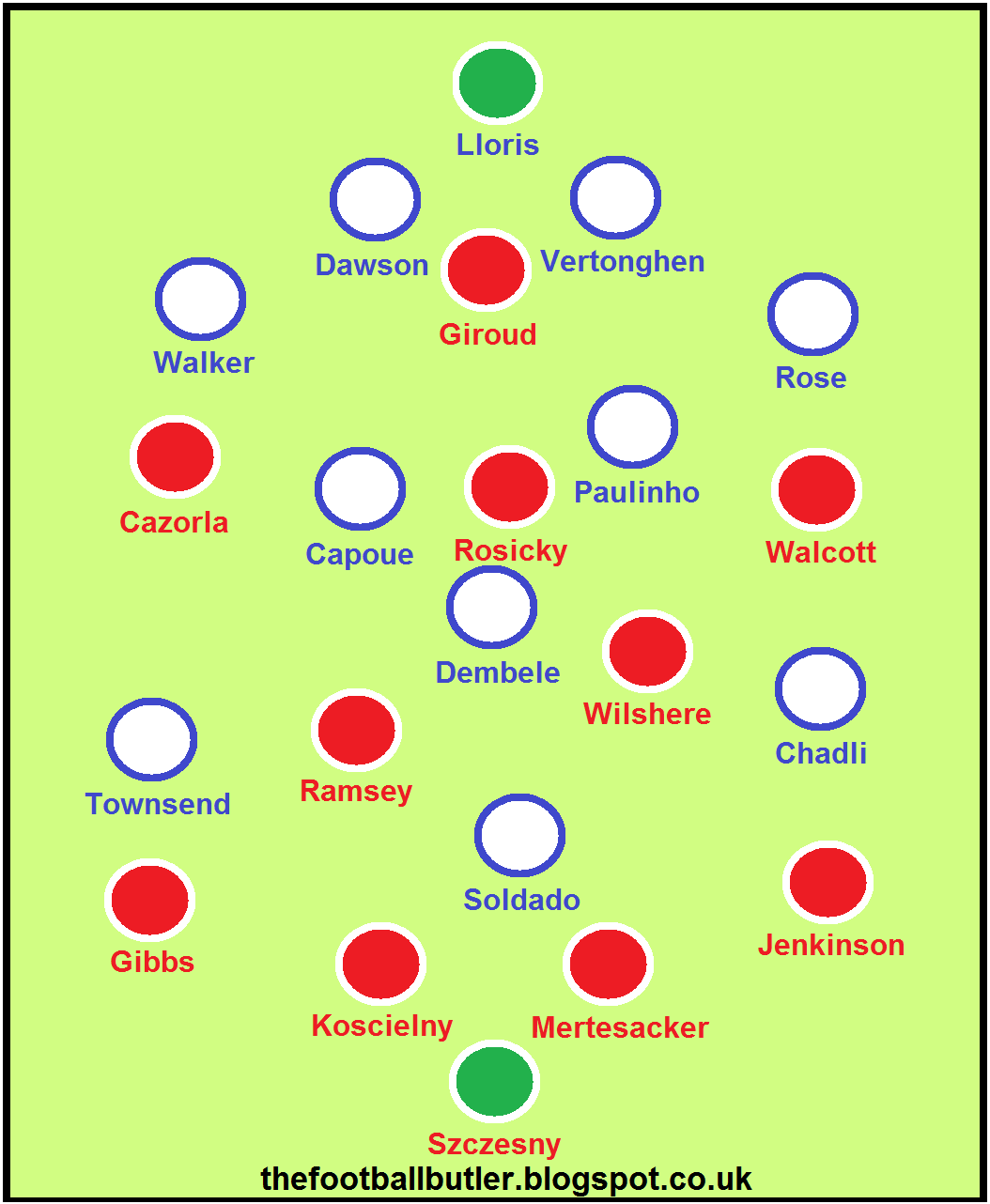 Playing a high line is a risky business, especially when Theo Walcott is persistently bursting in field. Dawson and Jan Vertonghen aren’t quick, and were saved on a number of occasions by Hugo Lloris’ exceptional ability to sweep off his line when Arsenal were breaking. Arsenal’s goal was textbook Olivier Giroud- a quick dash to the near post (he does it more than you think). He doesn’t score many of them because his acceleration doesn’t allow him to be clinical- but against Dawson, this wasn’t an issue, and ended up being the defining moment of the match. More credit should be given to Giroud for the quality of his finish; in such a close amount of space with a limited amount of goal to aim at, his ability find the corner was admirable.

3) Spurs became unstuck by their own gameplan.

Villas Boas’ 4-3-3 was the right setup in order to press high, but it meant Spurs were playing without a number 10, and therefore lacked creativity in the final third. When Spurs did have the ball, their early gameplan was to play balls into Nacer Chadli (perhaps an attempt to expose Carl Jenkinson), who would then feed Roberto Soldado. Andros Townsend cut inside on several occasions from the right to fire aggressive left footed shots at Szczesny, but this was Spurs’ only rare threat in the first half. Ultimately Townsend’s tendency to shoot was wasteful given how rarely Spurs maintained possession in Arsenal’s half, and it was strange that Villas Boas waited until the 75th minute to withdraw him for Lamela- the creative player they were crying out for throughout the match.

4) Mathieu Flamini had a significant impact in Arsenal’s midfield.

Arguably the greatest flaw in this current Arsenal midfield is their lack of variety: Aaron Ramsey, Jack Wilshere and Tomas Rosicky are all gifted midfielders on the ball, but none of them offer a dynamic midfield presence and a shielding presence for Arsenal’s back four. Flamini coming on for Wilshere might have been a blessing in disguise, as the Frenchmen assertively took control of the players around him, and gave the team the defensive minded midfield edge they needed. It was interesting to see him barking orders at everyone, often with extravagant hand movements regarding the team’s shape. While arguing that Arsenal lack a leader is contentious, Flamini’s influence in the midfield galvanised the team, and given the naivety shown by Laurent Koscielny in recent weeks, might have been crucial in seeing this game out.