Arsenal and Tottenham Hotspur come up against each other in the big North London derby today. Both teams are currently in excellent form, with the Gunners unbeaten in the league since the opening two gameweeks.

Spurs have also picked up good momentum over the last few weeks, humbling the likes of Chelsea in the Premier League and Inter Milan in the Champions League. Mauricio Pochettino finally has most of his players fit and firing to go at the moment.

Arsenal are currently outside the top four but a win over their London rivals should see them get back in the race. Tottenham Hotspur, on the other hand, have made their best ever start to a season under Mauricio Pochettino. They are yet to pick up silverware under the manager and there’s no doubt he will be aiming for one this season.

Here’s a combined XI for the North London derby featuring stars from both clubs.

Has been very good in goal for the Gunners since making his way into the first-team. He has bailed them out on a number of occasions and has looked good with the ball at his feet.

Bellerin has flourished in Unai Emery’s system this season, which allows him to charge forward at will. He has been good defensively and has picked up a few assists for the team.

A rock at the back for Spurs this season, Alderweireld is in fine form at the moment. He has maintained his fitness this time out and has been a vital cog at the back for Tottenham.

The youngster has taken his performances to a new level this season. With Laurent Koscielny out and Shkodran Mustafi failing to maintain any sort of consistency, it’s Holding who is doing the job at the moment.

Though he hasn’t quite hit the heights from last season, Davies takes the left-back spot. He has looked defensively astute but hasn’t been able to provide much going forward.

The French international looks a renewed and refreshed player for Spurs this season. His work rate has been magnificent and Sissoko now looks the player that earned his move to London.

Torreira is the engine and the heart of Arsenal. He is defensively very aggressive and his quick distribution has been a vital asset to the side.

Alli has always managed to play a huge role for Tottenham. Over the last few weeks, the midfielder has been in very good form.

Iwobi has been electric going forward for the Gunners this season. He really has flourished under Unai Emery.

The Frenchman has been in fiery form for the Gunners this season. He is their focal point up front and has scored a total of 5 goals so far.

Read more: Arsenal’s left wing problems would not exist if they sign this £100m-rated Belgian star in the summer

Aubameyang is currently the joint top-scorer this season alongside Sergio Aguero. The Gabon international has the best minutes to goal ratio this season. 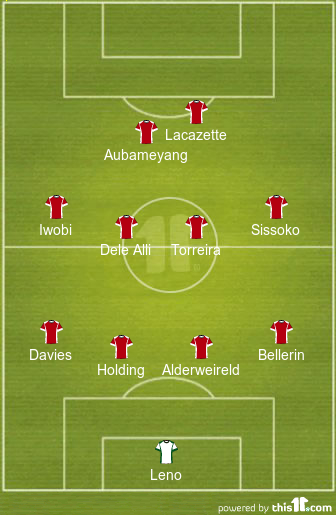