Arsenal reclaimed top-spot hours after losing it to surprise packages of the campaign in Leicester City courtesy of a lacklustre stalemate at Britannia Stadium last weekend and welcome bottom-half side Chelsea this Sunday afternoon as they look to add to the misery of the Roman Abramovich side.

How will Arsenal lineup?

“The good news is that [Mesut] Ozil will certainly be available,” told Arsene Wenger while speaking to the press on Thursday morning. “For Alexis [Sanchez] the next few days will be decisive, but I think this time he will make it to be available for selection.”

The Gunners seemed hopelessly bland going forward against the Potters with Mesut Ozil watching his teammates get soaked in the rain at Stoke on his television, but the World Cup winner will likely demote underachieving Alex Oxlade-Chamberlain to the bench on Sunday afternoon. On the other hand, Alexis Sanchez who last featured in a competitive game in late November makes his long awaited return to the teamsheet; however, his involvement will remain a mystery until he steps on the Emirates Stadium turf as Arsene Wenger vowed not to gamble on his fitness.

Tomas Rosicky will likely make the bench for the first time this season with his participation in the youth game confirmed, but long-term absentees such as Jack Wilshere, Francis Coquelin – who returned to training on Thursday – and Danny Welbeck will continue to be on the sidelines.

How have the Gunners fared lately?

Arsenal failed to register a victory in two consecutive games for only the second time this season but have otherwise notched nine goals in last five games across all competitions. Olivier Giroud has been detrimental in their decent run of form as he has been directly involved in five goals in as many fixtures.

The Gunners embody the topsy-turvies of the Premier League thrashing fellow title-contenders Manchester City on Monday and shipping four goals against a struggling Southampton side on Sunday; accordingly, their form will have as much influence as Gunnersaurus has on the result as top sides have the tendency to put their forms behind when they face off.

How has Arsene Wenger fared against Chelsea and Guus Hiddink?

The old enemies both have gotten the better of each other on two occasions, with the Arsene Wenger hammering the Guus Hiddink-managed PSV Eindhoven twice in the Champions League. However, during the Dutchman’s first Chelsea spell, the Arsenal manager saw his lads concede six goals in two losses in a span of two months in 2009. 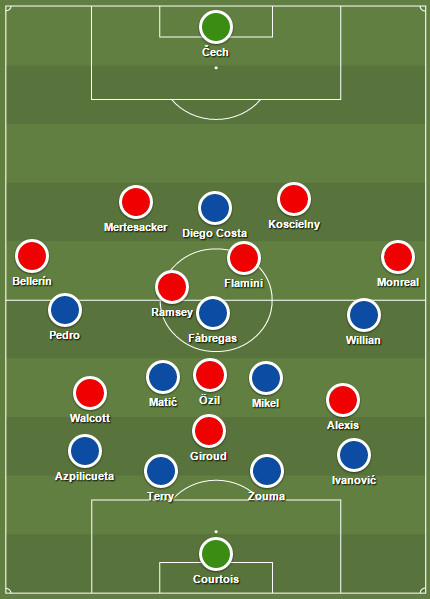 What can we expect of the London derby?

Derby games in football seldom fail to be unpredictable and always serve controversies and drama on the plates of the audience more than they could digest, but we might have a rather calm London derby as the odds of two managers shoving each other is not as astronomical as it had been in the recent past. Diego Costa who won the wrath of Gooners earlier this season will likely be booed as the home side establish their command over the game.