Another chapter of the Arsenal-Manchester United rivalry will be written when the duo meets in the Premier League this Sunday.

While the title is not on the line, as was the case when these two teams used to play in the early 2000s, there is a tight race to finish in the top-four on the offing now.

The Gunners are currently fifth in the league standings, a point behind their opponents of the weekend. Hence, expect a very exciting game between two teams who provide entertainment, especially when this fixture is played at the Emirates.

Without further ado, let’s take a look at the combined line-up featuring players of both teams, keeping the current form in mind.

Not many in the world are better than the Manchester United goalkeeper. Thus, he is certainly ahead of Bernd Leno in the pecking order.

Arsenal have been shuffling the pack at right-back since the long-term injury to Hector Bellerin. Hence, Young, who has done well at full-back for United, gets the nod.

The Gunners captain took some time to return to his best form after a long-term injury, and understandably so. But in the past two to three games, the difference he is making in this Arsenal team is evident.

Since the arrival of Solskjaer, Lindelof has probably one of the better centre-backs in the league. The Swede is showing consistency as well, which is the most important thing.

The way Shaw has been performing in the past couple of months, no wonder he was considered as one of the hottest properties in England before he suffered a series of injuries. The United man is certainly better than Nacho Monreal and Sead Kolasinac.

Nemanja Matic isn’t expected to be fit for this game, while Lucas Torreira is suspended. Hence, Xhaka gets the nod in defensive midfield. The Swiss international has played well since the turn of the year.

The Frenchman is probably one of the in-form players in the league since the arrival of Solskjaer. He didn’t play in the midweek against PSG and should be fresh to fire this Sunday.

The Welshman scored against Tottenham at Wembley and played very well in an advanced midfield role.

The Armenian star has been doing well at right wing for the Gunners but he can easily slot in as a number 10 and be a menace to the defenders, operating in between the lines.

The Belgian has scored a brace in all of the last three games combined in the league and Champions League. Talk about current form, he is right up there.

Even though he missed a great chance against Spurs last week, the Frenchman has been in great nick in front of goal. 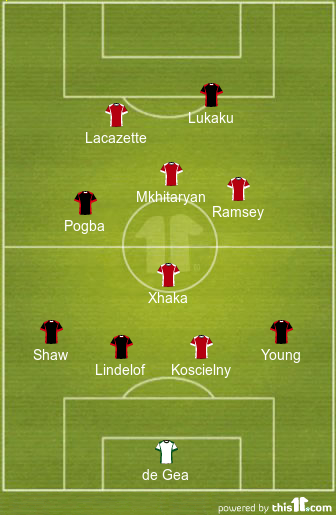