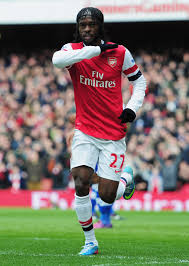 One of Arsenal’s worst signings over the past couple of seasons would definitely be Gervinho. Its not that I hate him or something, but the winger when first arrived from Lille for a fee of around £11m, was roped in to replace Samir Nasri who at that time had just played his best season in the Premier League before moving on to Manchester City. So when Gervinho arrived at the Emirates, he already had a quite a big hole to cover up. But two years down the line, saying that he has disappointed, would be making an understatement. Gervinho has fetched returns far from desired for and now it is probably the best time that Wenger offloads the Ivorian to a team which really vies for his services and also offers a fair deal for him instead of keeping  him as a second fiddle and wasting his career.

Marseille have reportedly shown interest in him and if Wenger can extract as much as £7m for him, that would be a deal well done. Rather than improving in his second term at the Premier League, Gervinho’s statistics actually deteriorated, with Wenger preferring to provide him with lesser opportunities. Thus, before it becomes too late, Wenger actually needs to listen to offers from other interested parties and cut the risk of losing him for free.

So how would life be when Gervinho leaves? Well there is Podolski and Cazorla who are Wenger’s first choice. But why don we go for a wild card here? Wenger must need an alternative player who would have the Midas touch that Gervinho lacked. He may not have to look too far with Benfica player Nicolas Gaitan available in the market.

Gaitan has had a tremendous season with the Portuguese side where they almost snatched the league title and ended as the runners up of the Europa League. He has himself scored five times and made 13 assists, a statistics that has elevated the 25 year old Argentinean as a hot transfer property and one which is clearly better that Gervinho’s.

According to Portuguese source ABola, Wenger has already shown a keen interest in the play-maker, who has a price tag of £38m. Surely an inflated price for a player like him, but if Arsenal can negotiate the price and bring it to a reasonable sum, there is no reason why Gaitan should not end up in London.

The exclusion of Gervinho and the transfer in of Gaitan may land Arsenal at a much better place than what they are now.

But the real question here is if Gaitan is worth it? He is definitely a stellar of a player, his technique, grace, close control and dribbling ability could be massively influential to the Gunners attacking play, but  £38m is an  unrealistic price tog on his shoulders!