Arsenal lock horns with Chelsea at Stamford Bridge on Tuesday evening in what could be a cracker-jack contest.

The Gunners dropped points once again in the Premier League last time out as they drew 1-1 with Sheffield United at the Emirates Stadium. On Tuesday, they’ll be keen to bounce back to winning ways and climb up the table.

Chelsea too would be looking to get back to winning ways after they suffered a cruel 1-0 defeat to Newcastle United on Saturday, thanks to an injury-time winner from Isaac Hayden.

Arsenal will be without Sead Kolasinac and Reiss Nelson until after the winter break. But Sokratis Papastathopoulos could be in line to return after sitting out the 1-1 draw with Sheffield United.

Meanwhile, Pierre-Emerick Aubameyang will be missing out again, with the Gabonese set to serve the second game of a three-match ban.

Leno is Arsenal’s undisputed first-choice in goal and should start against Chelsea.

Maitland-Niles has looked solid under Arteta and he is expected to resume his duties at right-back on Tuesday.

Mustafi had a decent game against Sheffield United, and even if Sokratis returns from illness, the German defender should retain his place at the back.

Luiz has shown a lot of improvement in the last few games and will be keen to prove a point to his ex-employers on Tuesday. He’ll partner Mustafi at the back.

The Uruguayan had an excellent outing against Sheffield United, winning plenty of tackles. One of the key players in the midfield, Torreira will look to nullify Chelsea’s threat.

Xhaka looks a player reborn under Arteta, dictating the play and covering a lot of ground. He is expected to start alongside Torreira in central midfield.

Pepe is slowly starting to show why the Gunners invested so heavily in securing his services from Lille. With his burst of acceleration, dribbling skills and movement, the Ivorian could cause problems to the Chelsea backline.

Ozil has shown flashes of him being back to his old self in recent weeks. The German has operated well without any defensive burden, thriving in the No.10 role and making Arsenal look lethal going forward.

Martinelli opened the scoring against Sheffield United on Saturday, which was his second in the Premier League and ninth overall in his debut season at Arsenal. He is an exciting player and can cause damage to any opponent with his pace.

With Aubameyang suspended, Lacazette will likely lead Arsenal’s attack. The Frenchman hasn’t scored in the league since the 2-1 defeat to Brighton at the Emirates Stadium in December. Thus, he’ll be desperate to get on the score sheet at Chelsea and fire the Gunners to all three points. 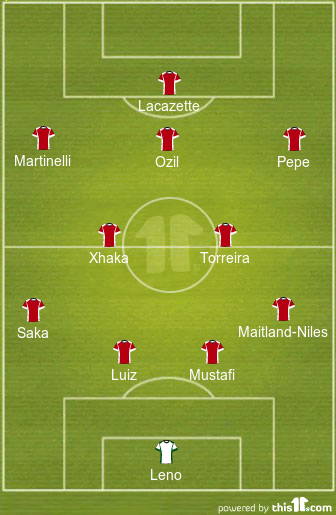