Scott Brown’s last-minute goal gave Celtic all three points as both sides finished with 10-men in a very fiery contest at Rugby Park on Sunday.

Celtic manager Brendan Rodgers made three changes to his side. Odsonne Edouard was one of three changes to the side that lost 2-0 to Valencia on Thursday, with Jonny Hayes replacing Emilio Izaguirre at left-back and Kristoffer Ajer in for Jozo Simunovic.

The Hoops started well but after two early attempts from Odsonne Eduard failed to find the net, Kilmarnock began to get a foothold in the game. Celtic found it difficult to get out of their own half in the final few minutes of the half and were relieved to go into the break 0-0.

Rodgers’ men returned to the pitch and meant business, although failed to create clear-cut openings. Kilmarnock threatened as well and found the net through Conor McAleny, only for the goal to be ruled out for outside. And then in the 71st minute came the twist. 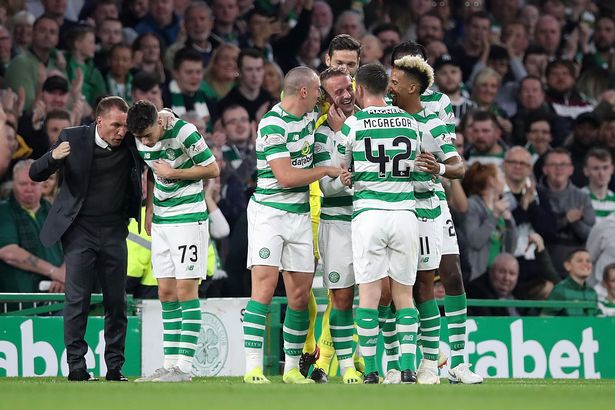 Kirk Broadfoot raised his foot in a challenge on Scott Brown and caught the Celtic captain’s shin. The referee wasted no time in brandishing a red cared to Broadfoot, whose silly challenge left Kilmarnock with 10 men.

Celtic almost made an extra man’s advantage count a few minutes later when Ryan Christie flashed a header just wide of the left-hand post. Kilmarnock were on the ropes as Rodgers threw Timothy Weah and Vakoun Issouf Bayo into the mix.

And as Kilmarnock looked like they had survived, Brown thumped a volley off Boyata’s header that deflected off substitute Alex Bruce’s arm and past Daniel Bachman in the net.

Brown was then sent off himself after picking up a second yellow for celebrating in the crowd, but Brendan Rodgers’ side extended their lead over second-placed Rangers after Steven Gerrard’s men were held to a goalless draw at home to St Johnstone on Saturday.

After a gritty 1-0 victory right at the death, here’s how some Celtic fans reacted on Twitter.

Hayes is my MOTM 🍀

Johnny Hayes has been our best player

Champions again as you know

Not a great game but it’s points that count: a great feeling to be 8 points clear! C’mon the Hoops! 👍🏻😀💚🍀

A true hallmark of Champions, playing to the final whistle! Proud to be a Celtic supporter. 💚⚽️🍀 #SPFL #8pointsclear #goingfor8inarow