Leeds 1-3 Norwich: Canaries thump the Whites to go top of the league

Right from when the previews for this top-of-the-table clash were released, the onus has been on league leaders Leeds to get a positive result against Norwich at Elland Road.

In the opening exchanges of this crucial fixture, Leeds looked a bit off the pace when compared to the Canaries. They were careless on the ball and overall, looked quite dumbstruck as a squad.

Unable to retain the ball, it took Norwich just five minutes to find the opening goal. Norwich were awarded a foul on the edge of the box and both Vrancic and Buendia stood over the free-kick. 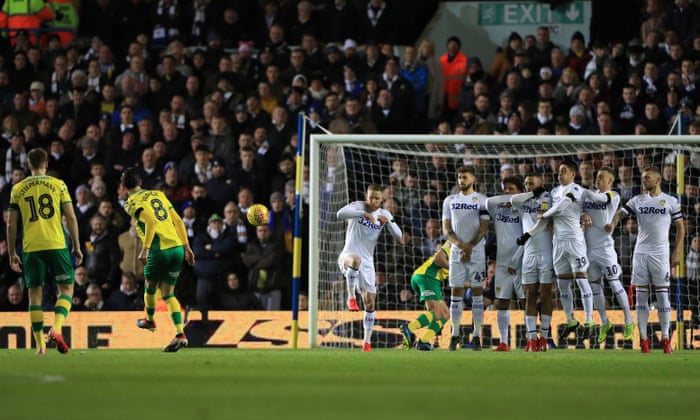 The Argentine chose to fake and left the ball behind for Vrancic to fire and fire he did. His thumping efforts went over the wall and rocketed into Kiko Casilla’s top-right corner, giving him no chance of getting a touch.

Trailing after just 5 minutes, Leeds delivered a positive reaction to going 1-0 down but despite some good work in the midfield, attacks just kept breaking down in the final third.

They paid the price for their terrible attacking play when Norwich scored another one in the 35th minute. A good pass to Vrancic opened up the space for him to take a strike.

His drilled shot was goal-bound but it took a wicked deflection off Jansson. The ball ricocheted to the right side where the arriving Teemu Pukki had the simple job of rolling the ball into an empty net past a stranded Casilla.

Already 2-0 down against title challengers at home, Leeds turned up the pressure but were unable to find the final product. It was in stoppage time that they finally put the ball in the net.

An Alioski free-kick was met in the box by Norwich keeper Krul but his touch let him down and it fell to an open Luke Ayling. He lofted it into the net but the referee noticed Jansson obstructing the keeper and gave a foul the Canaries’ way.

The teams went into half-time with Norwich in the lead. As expected, Leeds started the second half all guns blazing as they looked determined to produce a result in front of the home fans.

But as the half wore on, Leeds began to look tired and shabby on the ball. And after more than 70 minutes of entertaining end-to-end football, Norwich finally ensured all three points in the 78th minute.

Norwich built-up brilliantly from the left flank and a cross from the overlapping Jamal Lewis fell to Vrancic in the box. He volleyed into the ground and the ball was headed on target before it took a deflection off Douglas and ended up going through Kiko Casilla’s legs. 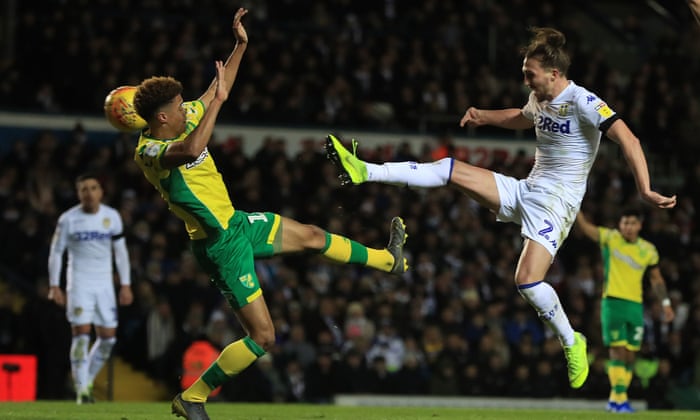 Even after this, Leeds looked toothless in the attack as their entire game had been ridden with misplaced passes and poor ball retention in key areas. But from a corner in the first minute of stoppage time, a Patrick Bamford header gave Leeds a consolation goal that made it 3-1 on the night.

Read More: No Oliveira, no problem – Norwich City would be better served signing one of these 3 quality strikers instead and here is why

The win saw the Canaries head straight to the top of the Championship on goal difference and gave them a massive win in their hunt for promotion. With Leeds and Norwich now level on points at the top, it’s anyone’s guess which way this season is going to go.

Here’s how some ecstatic Canaries fans reacted to this important victory:

So much pride so much love for Norwich City Football Club right now.

Desire,hunger showed from every single city player, Beethoven himself couldn’t of composed a better performance.

Best game I’ve seen Norwich play top performance you should 100% be proud of yourself! 🔰🔰🔰

Yesssssssssss , top of the league! What a performance and result 👍😀💚💛👏🤝

Performance of the season. We are top the league 👏👏🔰

Brilliant, get in! What a result, can’t imagine there were many City supporters that thought that would happen! We fought hard and out played them today, I thought we played some of the best football so far this season! I love being a Norwich fan 😍💛💚

What a performance, what a result, what a team.