As per reports, Maurizio Sarri wants to replace Antonio Conte at Chelsea after Napoli sacked him and appointed Carlo Ancelotti on Wednesday.

Conte guided Chelsea to FA Cup glory but failure to finish in top-four has put his future up in the air. The Blues are ready to wield the axe and replace Conte with former Napoli boss Sarri.

For those who don’t know much about Sarri, the Italian is a chain-smoker who has made Napoli a force to reckon with in Europe. The Naples-based club have undergone a remarkable transformation under Sarri. The Italian has turned them into one of the most attractive sides in Europe.

Speaking about Sarri’s style of play which is renowned as Sarri-ball, his teams have been displaying free-flowing attacking football in Italy. He prefers a fluid, tiki-taka, sleek passing and moving game which has endeared to the fans and perfectionists alike.

Sarri prefers to set his team up in a 4-3-3 style, something similar to Jurgen Klopp’s Liverpool. Sarri’s style of play was enough to see Napoli finish 3rd last season and runners-up to Juventus this season. 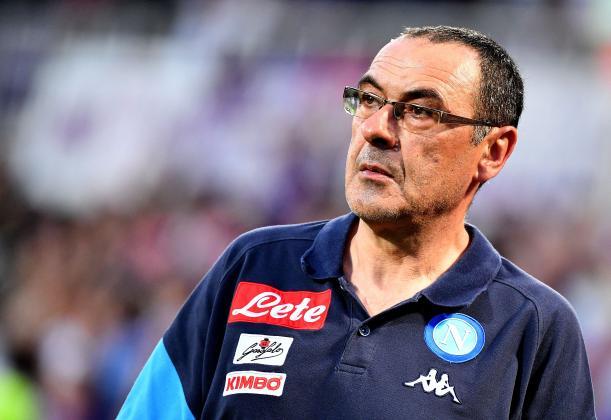 In his 4-3-3 system at Napoli, the two strong central defenders formed a fantastic partnership, with Sarri preferring to playing out from the back. The two full-backs are very adept both defensively and attacking-wise. The defensive midfielder controls the proceedings of the game with his passing abilities.

The presence of a defensive midfielder allows two box-to-box midfielders to help the team in defence as well as in the attack. The front three are speedy and skilful attackers that interchange positions freely.

Sarri had drilled the Napoli team perfectly and every player knew exactly what their roles were. The Italian’s system is the complete antithesis to a rigid and rigorous style of football, which has often been seen under Conte.

What made Napoli so wonderful to watch under Sarri was their ability to retain possession whilst also ensuring that the ball circulation was quick and precise. I

t is intriguing to see all the players working poetically and exploiting any space offered by the opposition teams. The best thing about his Napoli side was their attacking impetus, thriving on speed and precision.

While Sarri’s fluid and expansive style of play is pleasing to the eye and has fairly garnered a lot of praises from every corner of Europe, there are few weaknesses which need to be ironed out if he wants to taste success in the Premier League.

Due to his attacking style of play, his team would normally be susceptible to a direct counter-attack. Napoli didn’t concede goals at an alarming rate but when they did, there was no stopping. It is a prominent situation because going forward, the Italian club were very much sorted but problems arose at the back.

Also, Sarri does not rotate his players, doesn’t alter his formations and is not a fan of nurturing young talents.

Due to his high-intensity style of play, the players ran out of gas towards the fag end of the season, which basically turned out to be the turning point as they lost the Scudetto to Juventus, according to Napoli president Aurelio de Laurentiis.

However, Sarri no doubt remains one of the most underrated coaches in Europe. His philosophy and style of play have won him a lot of praises so far but if he is appointed by Chelsea, it is high time for the eccentric Italian to prove his worth by winning silverware.