A qualification process that began in November 2011, the craziness of the African playoffs comes to a head in November. The most intriguing; intense round of all the World Cup qualifiers, eyes will be firmly fixated on the continent. Here’s a preview of the games ahead.

The most eye-catching of all the ties, a big African name is guaranteed to fall. The dying embers of a ‘golden’ generation against the underachievers of African football of the last couple of years. It is guaranteed to be intriguing.

The final opportunity for Didier Drogba to make a significant mark at World Cup, the neutral can hope the Ivory Coast seal their third World Cup appearance in a row. The 35-Year-old made a return to the national team against Mexico in August after the nation yearned for the return of their idol.

If Senegal qualify it would be the first time since 2002, when they infamously reached the Quarter Finals. Last time out in World Cup qualifying, they were knocked out in the Second Round of qualifying . Qualifying has been something Senegal have made a hash of recently, failure to qualify for two of the last three African Cup of Nations has rose a few eyebrows. Especially for a nation that regards itself as one of the major players in the African game. However with a high variety of players playing across the top level of Europe, they are a stern test for the Ivorians.

Ivory Coast – Pipped Morocco to top spot with four wins and two draws. A Didier Drogba penalty at home to Morocco sealed their place in the playoffs. Fitting.

Senegal– Successfully navigated their way past an upcoming Uganda as the claimed a 1-0 win over ‘The Cranes’ in Marrakech to top their qualifying group. 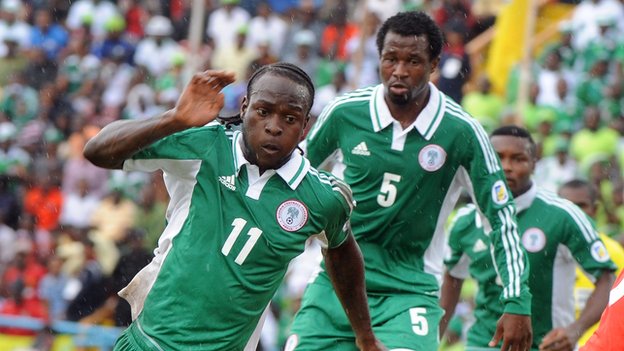 The African champions against a side finding its footballing feet for the first time since the 1960s. It is a game that could be more open than it appears. The two have met as recently as the 2013 African Cup Of Nations, when Victor Moses scored two penalties to seal Nigeria’s place in the knockout round, subsequently knocking Ethiopia out.

Nigeria have had a funny year, a rallied performance in the African Cup of Nations knockout rounds saw them claim only their third title. At the Confederations Cup they made a mockery of the African continent by turning up the day before their opening game against Tahiti. Clear disrespect for their opponent, it was fitting that they were embarrassed by conceding to the minnows. The final two matches showed how African football is still a long way from matching South American; European football as they were outclassed by Uruguay; Spain.

Ethiopia have been a revelation in the last few years, after qualifying for their first African Cup of Nations since 1982, the prospect of their first world cup is tantalising. A squad mostly made up of domestic players concerns could be raised about their level, however they showed at the African Cup Of Nations- certainly in their opener against Zambia, that they could match the very best in Africa.

Nigeria – Romped to victory in their group as they remained unbeaten against Malawi, Kenya and Namibia. Despite this, three draws could be described as cause for concern.

Ethiopia – In simplistic terms, Benard Parker sent Ethiopia to this stage. His own goal in the qualifying decider in Addis Ababa proved to be the difference in the group.<ul>

Tunisia are only here due to Cape Verde’s disorganisation that saw them field an ineligible player in the decisive qualifier between the two nations. Tunisia started the qualifying process with a flourish, winning their first three. However, their last three games saw them win none with two draws a defeat.

Nabil Malooul may rue the decision, he was sacked as a result of Tunisia’s failure to qualify. Change of manager has seemed routine for Tunisia recently, Sami Trabelsi resigned in January after Tunisia’s failure to qualify for the knockout phase at the African Cup of Nations. A Dutchman has been brought in to ‘steady ship’, Ruud Krol, who has a wealth of experience in coaching in Africa will take charge for the playoff game against Cameroon.

Cameroon got over not qualifying for the previous two African Cup of Nations by topping a group in which their closest challengers were Libya. Reports are about that Samuel Eto’o has again quit the national team, but it’s reported there is no reason behind his decision. Blessed with a core playing across Germany, Spain, England, the loss of Samuel Eto’o may go unnoticed. Especially with the likes of Eric Maxim Chuopo Moting on form at Mainz.

Topped a group ahead of Cape Verde after the Islanders fielded an ineligible player in the decisive qualifying match. Luck will be the buzz word if Tunisia book their place at Brazil next year.

Conquered Libya, DR Congo, Togo to top spot by a considerable distance, winning four out of their six group games. Failing only to win in DR Congo and Libya.

A real ‘heavyweight’ encounter, both Ghana and Egypt have been the main forces in African football over the past ten years. The latter has rebuilt since it’s failure to qualify for the last two African Cup of Nations, something that came as shock after they had eased their way to three consecutive titles in the previous three tournaments.

Led by former US coach, Bob Bradley. Their source of inspiration has been playing in honour of those who were lost at the Port Suez tragedy. The successes of Ah Ahly in the African Champions League, and the olympic side reaching the Quarter Finals of the Olympic Tournament has driven them on.

Ghana are slowly entering ‘World Cup mode’, Kevin Prince Boateng, Michael Essien have returned to international duty, dictating their selection in eyes of many by refusing to be involved in the grit of the African Qualifiers. Ghana can be best described as Africa’s nearly men, in their last three international tournaments they have been denied on penalties by Uruguay, Burkina Faso and by the single goal against Zambia in 2012. In the midst of their youth team performing relatively well and still boasting some of the best players African football has to offer. Ghana are still the best equipped to challenge for a World Cup.

Egypt – Breezed past an ‘easy group‘ containing Guinea, Mozambique, Zimbabwe with a 100% record. Making them the only side in world football that can boast such a statistic.

Ghana – After their opening away game it seemed like Zambia would cast their downfall again, however with a 2-1 win in Ghana against Zambia in the final round of qualifying, they successfully engineered the ultimate revenge for their 2012 Semi Final defeat.

Led by their experienced European based players of Jonathan Pitroipa, Charles Kabore, Bakary Kone, Aristide Bance, they have become one of African footballs top sides in a short period of time.

Algeria have recovered well since their collapse at the African Cup of Nations, which saw them crash out at the Group Stages. Since their exit in January, they have remained unbeaten, winning five out of the possible six since. An impressive answer from their Bosnian coach, Vahid Halilhodžić.

Burkina Faso – Beat Congo to top spot thanks to Niger, who drew 2-2 with the Congolese on the final match day. A 1-0 win over Gabon, sealed it for Burkina Faso.

Algeria– Beat a Mali side that has been tipped as one of the top sides in Africa for the past five years to top spot, with a 100% record following a 2-1 defeat in Quadougo.