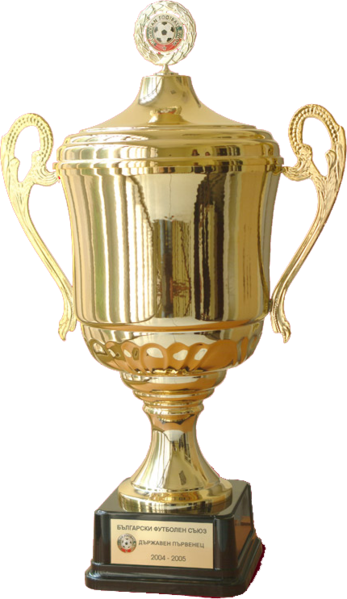 Newcomers Ludogorets had won the title at their first season in the Premier League, having won the Second Division the year before.  They won the cup too, to complete an amazing season for them.  Many were doubtful of their ability to replicate this performance 12 months on but they were involved again in the race for the title.

2011-12 they had won the title by 1 point from CSKA Sofia when it went down to the last game.  This time they were battling with Levski Sofia.  Levski is the 2nd most successful club in Bulgarian football with 26 titles to their name, but none in the last 3 seasons.  The destination of the title has evaded Sofia since 2009 and the capital city was desperate to wrestle control back.

We join the season in the final week.  The last 3 games of the season will be played on Saturday, Wednesday and Saturday.  Ludogorets and Levski were the runaway leaders and just to add some spice to the mix, the two were to meet each other in their third to last game.

Levski are unbeaten in their last 10 in the league, conceding just 5 goals during that time and never more than one in a match.  For Ludogorets their run was more impressive.  You need to go back to October 2012 for their last defeat in the league when they lost 0-1 at Chernomorets.  A run of 17 games unbeaten, conceding just 7 and also never more than 1 in a game.  That game was still their only defeat of the season.

So the scene was set at the Georgi Asparuhov Stadium in Sofia on 18th May 2013 where Levski Sofia, in 2nd, met leaders Ludogorets.  2pts separate the two clubs.

When the two met in Razgrad back in November, two goals from Genchev gave Ludogorets a 2-1 win.

This time the game was goal-less going into injury time.  Levski had managed to spring the offside trap several times, but found Stoyanov in the visitors goal, difficult to beat.  There were chances at both ends as the nerves were beginning to show.  81 minutes in and Ivaylo Petev, Ludogorets coach, made a substitution which turned the game, but not in the way he planned.  He took off his Brazilian striker, Marcelinho and brought on Mitchell Burgzorg a Dutch midfielder.  Just after the change, Ludogorets went down to 10 men as Slovakian defender Lubomir Guldan was sent off.  4 minutes into injury time and Levski’s 35-year old midfielder, Stanislav Angelov, hit a left-foot shot from about 25 yards out.  It looked to be going wide of the keeper’s left-hand post when Burgzorg stuck out a boot and it deflected off him into the net, leaving the keeper stranded.  There was barely enough time for the re-start and Levski had pulled off a dramatic win with the Ludogorets players left crestfallen as the enormity of what had just happened, began to sink in.

For the penultimate match, Ludogorets were to play their final home match of the season. They were up against Botev Plovdiv who were chasing a Europa League spot.  This was a much harder game in prospect than Levski who travelled to bottom of the table, Etar. Ludogorets had just thrashed them 5-1 and when Levski hosted Etar back in November, they won 7-1.

Since Ludogorets visited there, Etar Tarnovo had gone bust.  The Bulgarian FA were now awarding each game to their opponents, 3-0, so Levski picked up 3pts without getting their boots muddy.

Ludogorets got off to a good start when Igor Stoyanov put them ahead after 8 minutes. Stoyanov was top scorer last season with 16 but he was down on that tally this time round. 20 minutes in and Stoyanov doubled his, and his team’s total and Ludogorets won 2-0.

Going into the final round and 1pt separated the two teams

Saturday 25th May 2013 and the final day of the season.  Levski were at home to neighbours, Slavia.  Unbeaten at home all season they were looking at putting on a show for their supporters, against Slavia whose days of dominance in Bulgarian football ended in the mid-40’s, and were sitting mid-table in 8th.

Dyakov gave Ludogorets the lead on the half-hour.  But almost immediately DeCarvalho put Levski in front against Slavia as he pounced on some indecision in the visitors defence.  All the while Levski were winning they were going to be crowned Champions.

68 minutes in and Aleksandrov doubled Ludogorets lead as they’re now 2-0 up.  The whole season then swung in the 76th minute of both games.  Aleksandrov got his 2nd of the game and Ludogorets 3rd.  Unbelievably, at exactly the same point in Sofia, Slavia have a free-kick which is floated into the box and Vezalov inexplicablyput through his own net and Slavia had equalised.  The Levski fans and coaching staff then had to endure an agonising last quarter of an hour praying the home side would score again.  They didn’t, and Ludogorets were Champions.

The thing which stands out to me from these clips is the different atmosphere at both games.  At Levski there’s a great atmosphere, and one you’d expect from a local derby with the home side expecting to pick up the league title.  At Montana there seems to be more people in the commentary box than in the stands!

This was a bitter ‘double’ blow for Levski who had been beaten on penalties in the Bulgarian Cup too.

An incredible end to a season 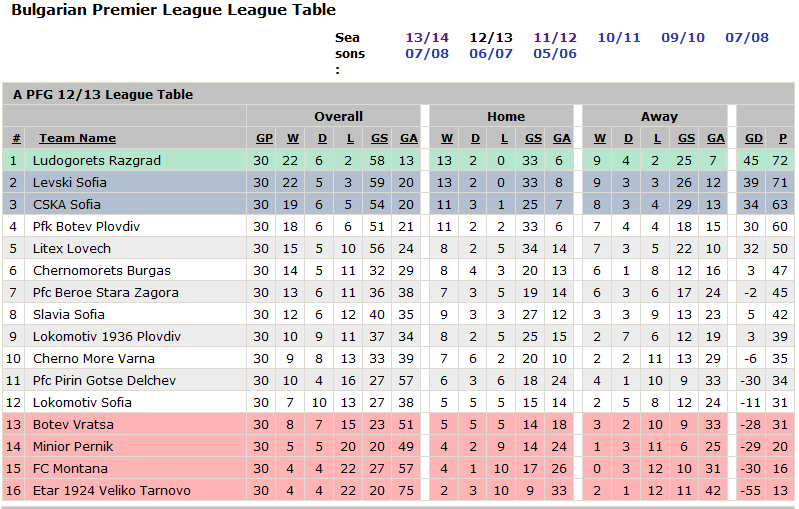 Published in permission with Pete Spencer