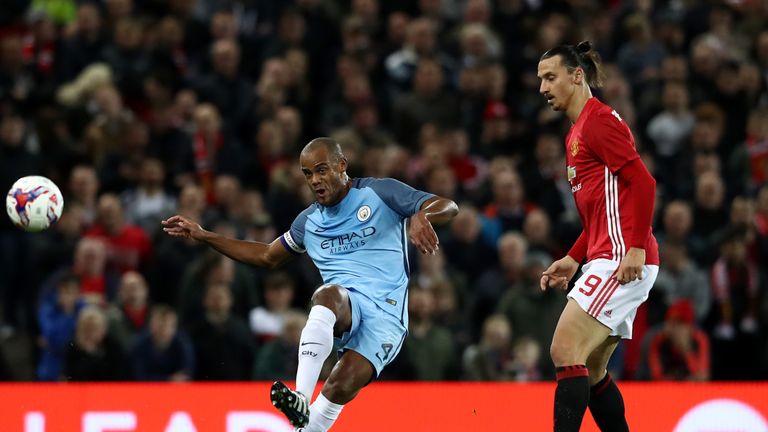 After two long weeks, Jose Mourinho could finally afford a smile as his Manchester United team managed to get one over nemesis Manchester City in the League Cup last night. Juan Mata’s solitary goal lifted the Red Devils to the quarter-finals of the competition as Pep Guardiola was knocked out of the League Cup early in his debut season. Both teams found it hard to play fluent football on the night as Manchester United’s talisman Zlatan Ibrahimovic provided the moment that gave them the goal. The Swede has not been at his best in recent games for the Red Devils but he had a sizzling second half at Old Trafford to help his side to victory. Here is an analysis of his individual performance against the Citizens.

Pep Guardiola put in a slightly weaker team for this game but his defense was strong with the likes of Vincent Kompany and Nicolas Otamendi as the center back partnership on the night. This meant that the Swede had to use all his strength and agility to help his side in the final third. At 35, Zlatan is not the quickest players across the turf at the moment and he played the first half of the game that he will not want to remember.

Zlatan Ibrahimovic: Has registered his first assist for Manchester United in 13 matches in all competitions #MUNMCI

He was in a tussle with the Manchester City skipper at the back as he failed to keep hold of the ball and help his teammates in attack. He failed to win balls in the air as he tried to drop deep to try and link up the midfield with attack but his passes were so off the charts that he soon became a liability. Over hitting passes and trying ones with a high risk, Zlatan gifted Manchester City a lot of possession sometimes in dangerous areas and never lifted any kind of a pressure that his team had on the night. His half was well documented in his careless passing in the midfield that set Iheanacho on goal in the first half. It was a performance that Zlatan will not be proud of but that was not the end of the game for the Swede.

He came into the second half with some purpose and the withdrawal of Vincent Kompany for whatever reason played into his hands. After the break, Zlatan started to get involved in the game, as he stepped up to take responsibility in the final third. He started winning duels and air balls while showing his strength to hold the ball up in dangerous areas. His tussle with Otamendi, which he won legitimately, created the best chance for United, from which Mata scored as Zlatan started to effect the game in attack. He got the better of Otamendi throughout the second half, as he managed to relieve pressure on his side at the back by keeping possession of the ball, winning free kicks and getting his side on the attack.

At 35, Zlatan is not expected to run the lines and draw defenders out but the second half performance at the Old Trafford showed why he is still one of the best strikers in Europe. Turning around a forgettable half, Zlatan picked up an assist for Mata’s goal and also set up a few half chances that United could not take full advantage of. Even after this performance, Zlatan has just one goal in the last 9 games for the side and is looking like a player in need of some confidence. Jose Mourinho and the Manchester United fans will hope that this performance gets him back to scoring consistently for his side.