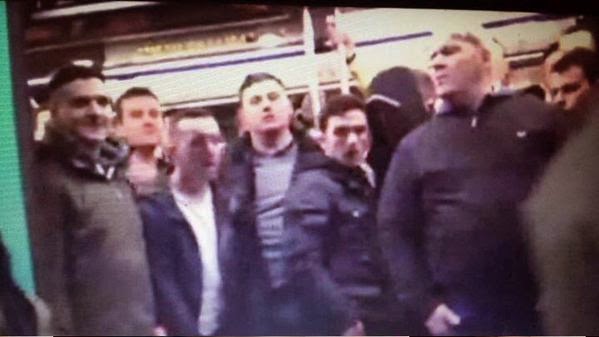 Like many I was shocked and appalled at the footage of Chelsea fans denying a Parisian entry to a train on the Paris Metro. If that wasn’t bad enough, the fans then delighted in chanting about being proud to be racist, as the Frenchman was black.

Next morning Chelsea Football Club released a statement saying if any of those involved proved to be season ticket holders then they would be banned for life.

Of course, many supporters of other clubs couldn’t pass up the opportunity to stick the boot in and claim they weren’t surprised, or that it confirmed everything they hate about the club. It seems to be beyond their understanding they’re simply exhibiting prejudice of a similar nature to that of the racists. You cannot label the whole club & particularly all Chelsea fans as racist purely because there were a few idiots who wanted to throw their weight around in a foreign country.

I have only seen a few comments seeking to justify this in some way, and some of them even suggested ‘what has happened to this country’ as a reason for it. Again, if you are outraged by foreigners coming over here acting like they own the place, then you can hardly defend those who do the same elsewhere.

There are several things to note about this whole unsavory event. Firstly, it’s irrelevant which team they were supporting, in fact, you could argue it’s irrelevant the reason they were in Paris. People are far more ‘braver’ in groups than they are on their own, and that includes men and women these days. What we had here was a group of English men portraying thuggish behavior in a foreign capital city, purely because they’re English. Let’s just imagine one of these fans trying to get on the tube at Leicester Square only to find a group Muslims, Poles, Turks or Bulgarians, unable to speak any English, barring their way? You can imagine the calls for throwing these foreigners out of our country.

We expect, even demand, people from other countries respect our country and traditions and yet time and time again British people go abroad with an arrogance it’s everyone else who is at fault.

How many people arrive in Tenerife and head straight for Lineker’s Bar? How often do you see Britons in Spain passing all the local restaurants and cafes looking for one advertising ‘full English breakfast’?

What you will also have heard said many times in Paris the other night was groups of supporters looking for somewhere to eat and drink and turning down options because they were too full of locals (this would’ve been phrased in more Anglo-Saxon language).

Watching the footage of this incident seemed to take us back about 30 years to a time when English fans went abroad in the belief we owned the place. Of course, many will point to there being elements of these incidents within plenty of clubs in the country and hopefully the fact it has now been brought to the attention, it should deter people from repeating it. But I must admit I thought Chelsea had left that type of ‘supporter’ back in the 1970’s.

These blokes will have family members who have seen the footage. Some of them will have children, they may possibly work with people who found the whole business abhorrent. Their employers may be very interested in what they’ve seen. As this footage is now on the internet it’ll be very difficult to completely remove it.

This is how I suggest we deal with the perpetrators. Personally, I still believe in public shaming people. Just banning them from the grounds will not change their views, and this is the key. There’s little point continuing to punish people unless they understand what they have done is wrong. They must be educated so they can see how wrong their behavior was. Their pictures are already being spread around the net and hopefully their names will be soon too. There may be the view you are giving them further publicity, but the publicity you are giving them will have repercussions for years. When employers receive job applications one of the first things they do is ‘google’ the name to see what comes up. If they see all the coverage about this incident, they are likely to think twice about giving them a job. In this way there is a great opportunity for the suspects to admit their mistakes. As I said earlier, people are far more brave in a group than on their own and one or two of the group may well have been uncomfortable with the chanting, but weren’t ‘brave’ enough to stand up and say so. They now have an excellent opportunity to distance themselves from this.

Get your face on camera apologizing to the victim would be a good start.

Many have long pointed out the idiocy of supporters chanting racist abuse one minute, then cheering a black player from their own team the next. It is perfectly plausible to think that just after the ‘we’re racists and that’s the way we like it’ chant, these idiots then went on to sing of their love for Didier Drogba.

Of course an education program takes time, money and motivation. It is far easier and cheaper to just ban these people, but you’ve not dealt with the case, only the effect. If you have blisters on your feet it is far cheaper to put a plaster on it, yet the problem is your shoes are too tight. Much the same as it’s fairly pointless continually locking up drug addicts without curing them of their addiction. Unless these people see the error of their ways they will not change. They should be made to view the footage again and then have it turned round to show them as the victim and see how they’d feel about it. The anger of their social circles should also shame them into looking inward to ask themselves whether they really should be treating others in this way.

It also should be pointed out, there is racism within all cultures and religions and white people are certainly prejudiced against in a number of situations. However, it hardly progresses the issue further if we hide behind the rather juvenile “well they’re doing it, so why can’t I”?

Much as it took Italy a long while to truly accept the English back in the country after Heysel, this will make things tougher for supporters of other clubs going to Paris and it could well impact on non-football fans. If you think that’s unfair, then consider Parisians are merely demonstrating an underlying prejudice against the English in exactly the same way many supporters of rival clubs have been waiting for an incident such as this as a reason to spout their hatred of Chelsea.

This has nothing to do with Chelsea, they are powerless to control who does and who doesn’t support them. These were middle-aged English men who are part of our society and we are all responsible for our society.

Let’s hope society can deal with them.