As the North Korean national football team continues to improve and continue their successful run of results over the past few years, their players have become more attractive to foreign teams that are looking to tap into a previously unexplored and cheap pool of players in the rogue state. The latest individual to be acquired is Jong II-Gwan, a striker capped 20 times for the national side, who will go on trial at Partizan Belgrade – who last season won their sixth straight Serbian SuperLiga title and have a rich history in Yugoslavian football and the European Cup. A number of North Korean footballers have left their domestic clubs at home and ventured abroad into Europe and Asia, and enjoy a freedom that very few countrymen and women have access to under the Kim Jong-un regime.

The 28-year-old right back plays in the Swiss Challenge League (the second level in the Swiss football pyramid) for FC Wil 1900, having joined the club back in 2010 – just days after North Korea plunged out of the World Cup in South Africa following three straight defeats (although he started every game against Brazil, Portugal and the Ivory Coast). Jong-Hyok is an important member of both the national team and FC Wil, with 43 caps for the national team and featuring near the top of the table for the minutes played at his club in Switzerland.

Born in Japan, but from the large Korean community that exists in the country, the 25-year-old defender still resides in his country of birth. Having played for Korea University (an institution directly funded by the North Korean government) in South Korea while studying, he was offered a contract by Cerezo Osaka in 2011 when they were in the J-League Division 1. It was at this time that he was rewarded with four caps for North Korea, but poor form meant that he wasn’t needed at international or domestic level. This season he has been transferred on loan to J-League Division 2 side Vissel Kobe and has played eight times. 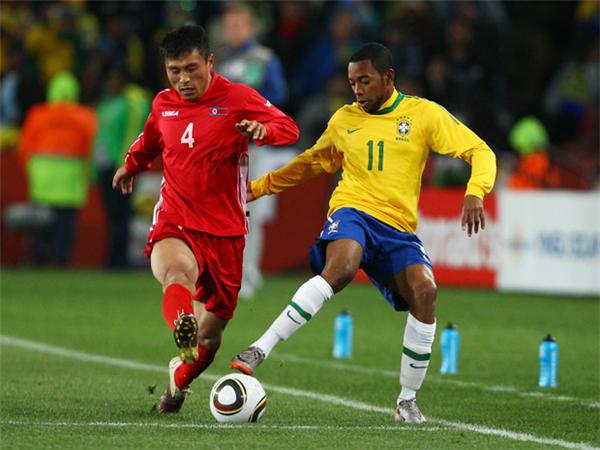 The two 28-year-olds have made the leap from North Korean football to Thailand together. While Nam-Chol plays in midfield and Kwang-Chon in defence, they both began their careers at April 25 (the club of the DPKR military forces) and enjoyed league title success. Both players have over 60 international caps and were part of the team that won the AFC Challenge Cup in 2012, in which their performances impressed officials at Thai Premier League club Muangthong United. Since the club’s promotion to the TPL in 2009 they’ve been extremely successful and won the league title three times – the third time coming in the first season the North Korean pair joined and played regularly in the first team.

The  29-year-old striker is probably the most recognisable North Korean footballer to Western football fans. Tae-Se became famous during the 2010 World Cup when he was shown crying during his country’s national anthem before their match with Brazil (leading to a number of newspapers incorrectly claiming death threats from home had pushed him to the edge), but before this had played three seasons in the Bundesliga 2. and Bundesliga 1. with Vfl Bochum and 1. FC Koln. Like a number of North Korean internationals, the striker was born in Japan into a North Korean community and attended the Korea University in South Korea. He requested a North Korean passport and after negotiations with FIFA, was cleared to play. His return to South Korea this year to play for Suwon Samsung Bluebirds caused anger among some of the country’s football fans who wanted him banned for previous pro-North Korean regime comments.

Another forward who came to prominence during the last World Cup when his playing opportunities were scuppered by an administrative error from the North Korean FA. Coach Kim-Jong Hun decided to include Kim Myong-Won in his 23 man squad for the tournament but to increase the number of attacking options, put the 30-year-old down as a goalkeeper. FIFA saw through the deceptive behaviour and stated that the striker wouldn’t be able to appear in his preferred position but between the posts. Despite this, the following year he made a move to the Mongolian Premier League for the capital’s team, FC Ulaanbaatar, who finished third in the most recent edition.