Manchester City moved to the second place in the Premier League standings with their 3-0 win against Hull City at the KCOM Arena on Boxing Day. Guardiola’s men were made to work hard for the win as the home team held their own for a good part of 70 minutes. They even managed to come close to scoring and were always a threat from the set-pieces. However, things suddenly went south for Mike Phelan’s men as they conceded a penalty which Yaya Toure scored from in the 72nd minute. Kelechi Iheanacho doubled the visitors’ lead six minutes later, before a Curtis Davies own goal compounded Hull’s misery on the evening.

City are now seven points behind leaders Chelsea but could slip to third place after Liverpool’s match on Tuesday. Hull City though are struggling big time at the bottom of the table, with just only one win in 16 games now.

Here are five pictures that sum up the clash between the title challengers and the relegation battlers:

After having sat out the previous games, John Stones returned to the starting line-up against Hull City in place of Aleksandar Kolarov. However, the return did not last much long for the Englishman as he picked up a knee injury eighteen minutes into the game and was taken off to be replaced by Kolarov. It was confirmed after the match that the injury wasn’t a serious one, however, it comes as a setback to both City and Stones himself.

Hull City played brilliantly to keep City out for close to 70 minutes. And it was not like they were just defending throughout the game. The home team offered a great threat from set-pieces throughout the match. One such moment came in the second-half when Robert Snodgrass came close from a free-kick only for the ball to be sent behind for a corner. The resulting corner caused the biggest problem for City on the evening as Michael Dawson rose the highest to direct the ball towards goal. With Claudio Bravo caught in no man’s land, the goal seemed certain, but Bacary Sagna made a heroic intervention and cleared the ball off the line to keep the score intact. 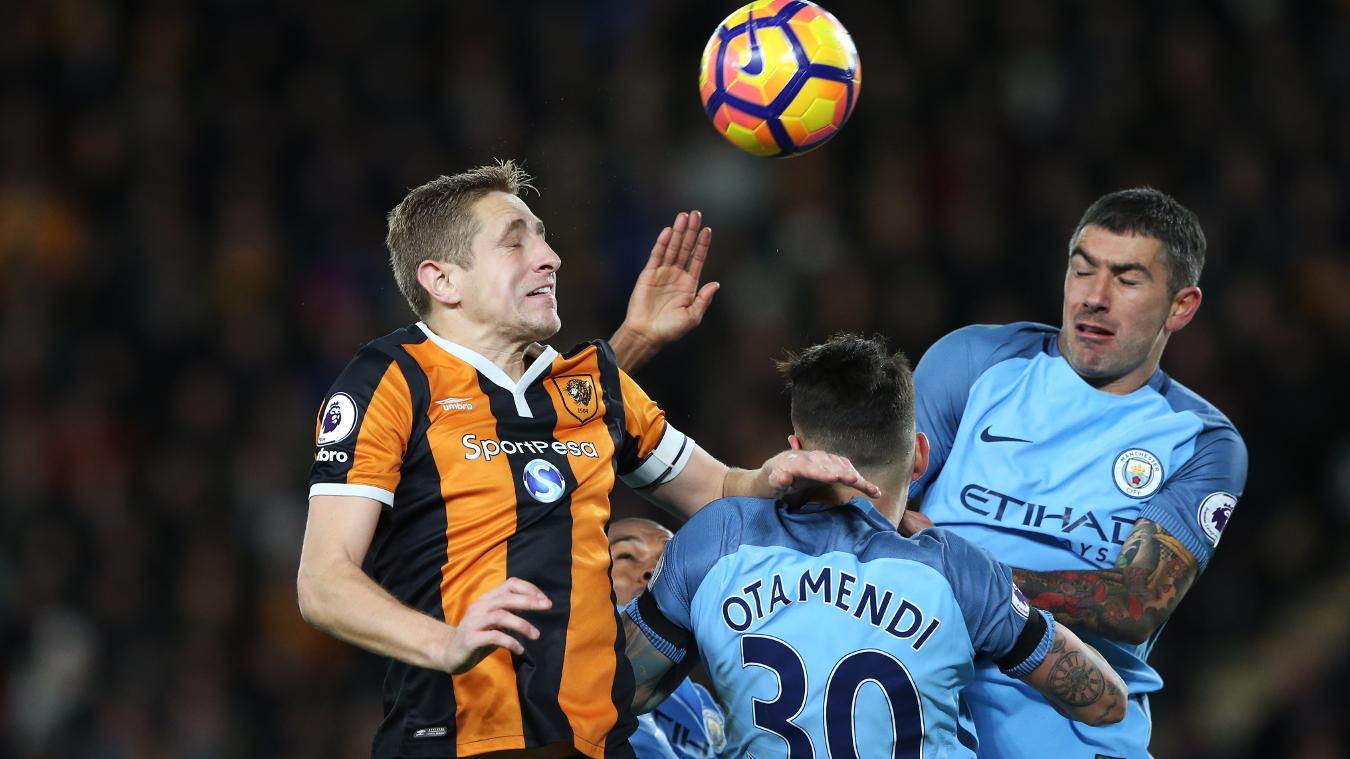 After doing so well for more than three-quarters of the game, Hull City were made to punish for a moment of recklessness and indiscipline from left-back Andrew Robertson. Raheem Sterling burst into the Hull box and went past Robertson only to be brought down by the defender, leaving the referee with no choice but to point to the penalty spot and Yaya Toure made no mistake from the spot giving City the lead. All of Hull’s good work was undone in a moment of lapse in concentration.

And it did not take long for the second goal to come after the first one. Six minutes past Toure’s penalty, Kevin De Bruyne and David Silva combined beautifully with the Spaniard playing in Kelechi Iheanacho with a sublime low ball that the youngster tapped into the back of the net to put the match to bed.

More Anguish for the home side in injury time

However, it did not stop there for the home team. Late into the injury time, Raheem Sterling made a lovely run into the box from the left-flank and fired in a cross across the goal only for defender Curtis Davies to bundle it past his own keeper to make it 3-0 for the Citizens, putting the icing on the cake.