Liverpool’s left back problems are well documented this season-  they have been without the services of their first choice Jose Enrique for much of the season due to a recurring knee problem that required surgery while loan signing Aly Cissokho has been so unimpressive that youngster Jon Flanagan has moved up in the pecking order ahead of him.

So, it comes as no surprise that Liverpool have been linked with a host of left backs , a position that is definitely going to be a priority in the summer. Latest in the list of names is Barcelona left back Adriano, but here are three reasons why Liverpool should steer clear of the Brazilian. 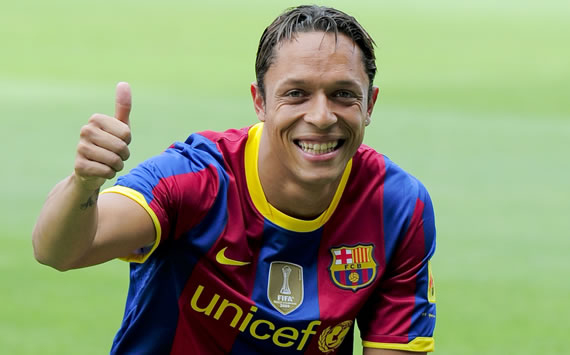 Adriano was known as a versatile player before he moved to Camp Nou, but since his arrival, he has been converted into a left back through the sheer lack of other options at the Catalan side. Since the arrival of Jordi Alba, he has found his role limited to substitute appearances of providing cover for Alba.

Adriano is not a natural at left back and that shows at times when he is put under pressure by opposing teams. Given the amount of possession that Barca hog, the opposition teams get very few opportunities and as a result, his defensive failings are not exposed as often. However, at Liverpool he would be far more exposed as Liverpool do not rely on possession as defensive tactic.

Liverpool have found out to their detriment this season that La Liga fullbacks don’t find life easy in the Premier League with Cissokho, and like him, Adriano may be found out just like the Frenchman. His one on one defending isn’t great and at times, his positioning lets him down, which could prove to be his undoing in the Premier League.