With all signs now pointing towards the direction of Jose Mourinho taking charge of the Chelsea squad from next season, we can see a host of players coming to the Stamford Bridge in the next couple of months. It is being reported that owner Roman Abramovich has already given Mourinho a blank cheque (Hypothetically) to pursue any player he feels like and Mourinho’s actions show he is in full mood to make the maximum use of it. Chelsea have been linked to a lot of players right now but no official confirmation has been made yet. Here we name three more players who have been under Mourinho’s radar and may head to the London outfit in the summer. 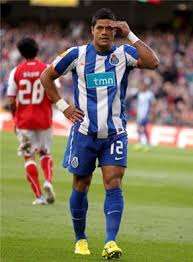 Chelsea could now be more interested in the Brazilian striker since Falcao has decided to join the newly promoted Ligue 1 side Monaco. Also in the previous season Chelsea wanted to bring him to England but he opted for the big spending Zenit St Petersburg. But the time in between has not been always smooth for the player, who has fallen out with the manager and been subjected to racial abuse. Thus Hulk should be looking for a switch and Chelsea may be just providing him with the lifeline.

Mourinho is said to be interested in this France under 21 player who plays as a defender for Porto. He has been absolutely breathtaking for the club this season who have conceded just 14 goals in their league. If the Special One succeeds in bringing him to Chelsea, he will provide extra options for the club and with Ashley Cole reaching the twilight of his career and Monaco eyeing Ivanovic, Mourinho may need to shape up his defence sooner than expected.

Mourinho has the reputation of reuniting with his ex colleagues and thus when the news first broke that even after such a brilliant season with Chelsea, David Luiz may be heading out and Sami Khedira may be brought in as a replacement, not many people were surprised. Khedira has been a regular feature in the Madrid team under Mourinho and the manager puts a lot of faith in him. But he would not come cheap for the club with Madrid expected to quote a fee around £20m.