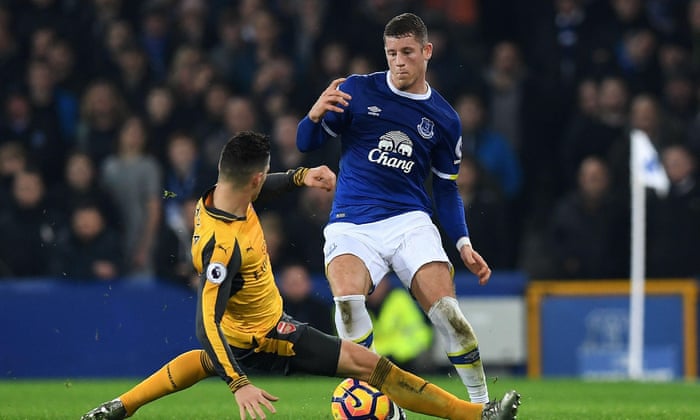 Mauricio Pochettino’s Tottenham Hotspur have found consistent results hard to come by off late after a decent start to the current Premier League season. They are currently more than 10 points off the top of the table and are fighting to get into the top-4 and the manager will be hoping that his players can find some form going into this busy festive season in England. The manager is also looking to add a few players to the squad in January and one player who is extensively linked with a move to the Lane is Everton’s midfielder Ross Barkley. The 23-year old is at the fag end of his contract at the club and is yet to put pen to paper and the Spurs are ready to pounce on him in January.

However, Everton manager Ronald Koeman revealed today that the club is not ready to sell and that all such rumours are rubbish. He also went on to reveal that Everton are planning to offer him a lucrative contract in the near future, leaving Spurs with little chance of signing him. But Pochettino is desperate for an attacking midfielder after his side’s issues in front of goal and here are three players the manager can target in place of Barkley:

One of the hottest prospects in world football at the moment, Yunus Malli is linked with a move to the Premier League with a number of top clubs interested in his signature. A playmaker who loves to play just behind the striker, Malli, has 8 goals and 7 assists in 22 appearances in all competitions this season for the German side, a return that is better than Barkley. He is also available on the cheap at around £10m making him a perfect option for Pochettino who seems set to miss out on the Everton man.

The 23-year old Dutch international is one of the most attractive players in the domestic circuit in Netherlands and is fast becoming an important player for his club at country. At 23, he is currently the captain of the Ajax side this season and has been in sublime form for his side. Another player who loves to play behind the striker, Klaassen has 12 goals and 5 assists to his name already this season and is a player bang in form. He ticks most boxes for the manager at the White Hart Lane and is more than a capable option for the manager if he misses out on Ross Barkley from Everton.

A lesser known player in England, Ziyech is an attacking midfielder who can also play on the right wing. At 23, he has already made 9 appearances for the Morocco national team scoring 5 goals along with the 4 he has scored in 11 league games in Netherlands this season. He just moved to the club from Twente but the way he has adapted to a new league is something that will attract Pochettino. He has 7 goals and 7 assists in all competitions and is in a decent form which will help Spurs who have been a bit weak at times in front of goal. He has loads of potential and is a player that will fit into Pochettino’s style of play at the Lane making him a decent option in place of Ross Barkley in January.