Tottenham aren’t looking like credible title challengers due to the team’s general lack of killer instinct in front of goal.

The side has continued their sole reliance and dependability on Harry Kane for the goals, and they have often suffered in his absence.

Even whenever he is available, he has sometimes cut a frustrated figure upfront due to the lack of quality forwards that are able to perform well on a consistent basis and help him in attack.

With the winter transfer window less than 2 months away, Mauricio Pochettino sure wants to bring in attacking reinforcements in order to take the heavy workload off Kane, provide stiff and needed competition to the club’s current crop of attackers, and also have enough quality in depth in the department.

So, which 2 forwards, who could realistically join Spurs this January can the Argentine make a swoop on? 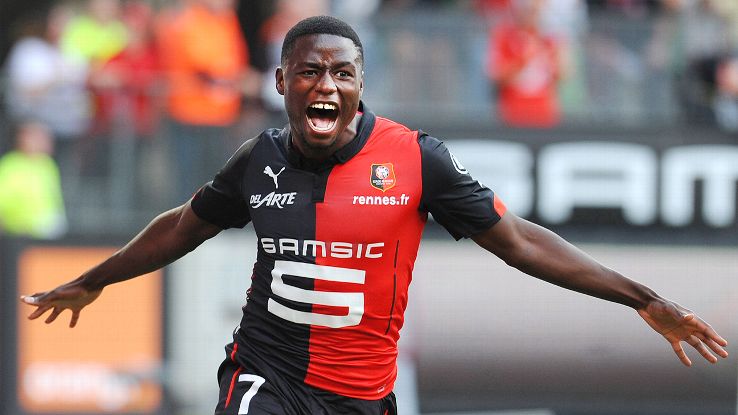 Tottenham’s high-pressing football means only players who are known for their tirelessness and pace would have a chance of hitting the ground running.

Hence, Rennes forward and France youth international Ntep would be a perfect fit for Spurs. The 24-year-old is known for speed and ability to come out tops in one-on-one situations given his eyes for tricks and dribbles.

Primarily a left winger, the Cameroon-born Ntep combines both feet to devastating effect and has attracted a couple of top sides. Southampton, Liverpool and Spurs’ north London neighbour Arsenal, are all interested in the services of the forward whose contract ends next summer.

Having rejected a contract extension with taking a giant leap in his career the next thing on Ntep’s mind, Tottenham have a chance to convince him to agree with a deal in January. The player is keen on playing Champions League football, and that’s on offer at the London club.

At such a club known for harnessing talents, the speedster has a better chance of breaking into Les Bleus having been on the fringes for some time. Didier Deschamps invited him in 2015 to play in friendlies against Belgium and Albania, and he hasn’t been recalled since making his debut against the former.

His versatility, as he is able to play as a centre-forward would come handy at Tottenham, and he could get drafted to play in the number 9 position in Kane’s absence with Janssen struggling to get off the mark from open play.

Ntep has 4 assists in 9 Ligue 1 appearances this term and will no doubt be a great addition to Tottenham for all the right reasons.

There aren’t many finishers better than the England-born Irish striker in the English Championship.

In 17 appearances, the 24-year-old Brentford striker has scored 10 goals and assisted one, and has seen his form attract Ireland’s manager Martin O’Neill, who wants him to line up for the boys in green.

Not so often do we get to see strikers from the 2nd division make a very successful transition to the demands of the EPL, but Hogan looks like one cut from a different cloth going by his history of moving through the divisions with ease and adapting quickly.

Scott’s striking talents and growth from his North Premier League days to the League Two saw him get named in PFA Football League Two Team of the Year in 2013, and he is already following up with exploits despite moving 2 divisions up.

He was named Championship Player of the Month for September and could win the Golden Boot for the season as only Newcastle’s Gayle has scored more than him thus far (13).

With his sharp eye for a goal, who says he wouldn’t fit well into Tottenham’s lineup as a cover for Harry Kane? And with Brentford not looking close to promotion, Scott might not hesitate to leave for greener pastures come January.