Wolverhampton Wanderers have made an inspiring start to their Premier League season, picking up 5 points from their opening 4 games of the season. The Wolves have looked confident and determined to stamp their authority.

Losing just one game so far, Nuno Espirito Santo’s side came away with a scintillating point against champions Manchester City as well. Wolverhampton Wanderers brought in a flurry of high-profile signings to boost their ranks. 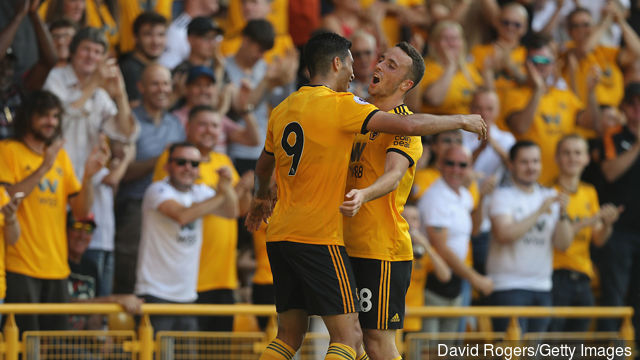 The 27-year-old has so far picked up 1 goal in 4 appearances this season but came close to finding the net on many other occasions as well. Jimenez has looked electric going forward for the Wolves, constantly posing a threat.

Granted, he is guilty of scuppering a number of chances in the final third but it’s clear that Jimenez is getting into the right positions.

He averages 2.8 shots per game and has always kept the goalkeeper on his toes. Jimenez is a powerful forward who uses his height and strength to great advantage. The Mexican’s only goal so far came via a header from Ruben Neves’ cross in the first game, which proves his potential as a massive aerial threat.

The 27-year-old is also exceptional at holding onto the ball under pressure and waiting for his teammates in support. He is excellent at build-up play during counters and is superb at one-touch passing in the final third.

Read more: Why Wolves’ £18m speed dribbler could help them achieve a top-10 finish in the PL this season

As Wolverhampton Wanderers return to take on Burnley in the Premier League this weekend, Jimenez will be aiming to get on the scoresheet to further step up his momentum.

He has so far looked energetic and venomous in the final third. If the Wolves are to break into the top-ten this season, the Benfica loanee has to play a crucial role in the process.